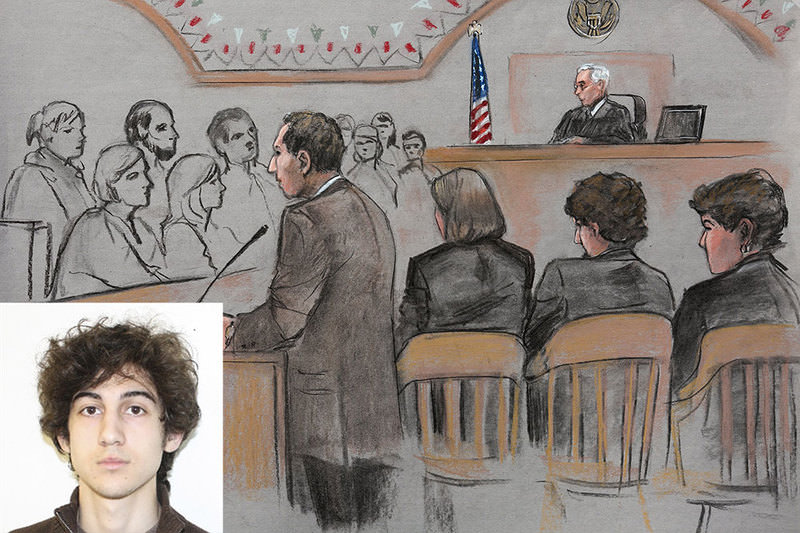 by French Press Agency - AFP Apr 08, 2015 12:00 am
A US jury unanimously convicted Dzhokhar Tsarnaev of carrying out the 2013 Boston bombings, the worst attack in the United States since the 9/11 Al-Qaeda hijackings, on Wednesday.

The 12-person jury took a day and a half to find the 21-year-old guilty, using a 32-page verdict form of 30 counts related to the attacks, the murder of a police officer, a car jacking and shootout while on the run.

The Muslim immigrant of Chechen descent, who took US citizenship in 2012, now faces the death penalty or life in prison without parole when he is sentenced by the same jury after a later second phase of the trial.

He stood pale and motionless next to his lawyers as he heard the verdict dressed in a blue sweater and dark blazer.

Three people were killed and 264 others wounded, including 17 who lost limbs, in the twin blasts at the city's marathon on April 15, 2013.

Tsarnaev was arrested four days later, hiding and injured in a boat on which he had scrawled a bloody message apparently justifying the attacks to avenge the US wars in Iraq and Afghanistan.

The marathon bombings shocked the relatively small northeastern city of Boston and revived fears of terrorism in the United States after the September 11, 2001 attacks on New York, Washington and Pennsylvania.

Government prosecutors portrayed Tsarnaev, at the time a 19-year-old student at University of Massachusetts, Dartmouth, as a callous terrorist who carried out the bombings to punish the United States.

Tsarnaev's lawyers admitted that he planted one of the pressure-cooker bombs concealed in a backpack, but portrayed him as a feckless accomplice, bullied or manipulated into taking part by his more radical elder brother.

The defendant looked pale as he entered court to hear the verdict dressed in a blue sweater and dark blazer. His lawyer Judy Clarke gave him a brief pat on the back as he sat down.

Massachusetts has not executed anyone since 1947, and Roman Catholic bishops in the state reiterated their opposition to the death penalty on Monday, when the first phase of the trial wrapped up.

Prosecutors spent four weeks building their case, calling 92 witnesses in an effort to paint Tsarnaev as an active and willing bomber alongside his elder brother, who was killed by police while on the run.

"He wanted to terrorize this country. He wanted to punish America for what it was doing to his people," assistant US attorney Aloke Chakravarty told the court in an emotional closing statement on Monday.

"That day they felt they were soldiers, that they were mujahideen and they were bringing their battle to Boston," added Chakravarty.
They portrayed a calculating killer -- a marijuana-smoking, laid-back student who had recently failed a number of exams and become an avid reader of the Islamist literature that investigators found on his computer.

They claimed he was self-radicalized as early as high school, plotted the attacks up to a year in advance and was influenced by the teachings of US-Yemen cleric Anwar al-Awlaki, who was killed in a drone strike in 2011.

The one-month trial featured harrowing videos, filling the court with the screams of victims and the sight of blood, and heartbreaking testimony from survivors and relatives of the victims.

Prosecutors said the brothers carried out the attacks as partners to avenge the deaths of fellow Muslims overseas after learning how to build pressure-cooker bombs through Al-Qaeda English-language magazine "Inspire."

They emphasized the appalling injuries that killed eight-year-old Martin Richard, Krystle Campbell, 29, and Lingzi Lu, 23, and the murder of police officer Sean Collier, who was shot five times.

"His entire body was shattered, broken, eviscerated, burnt. There wasn't a part of his body that wasn't destroyed," said Chakravarty of Martin.

Minutes later, Tsarnaev casually bought milk, then headed to the gym, laughing and joking with friends and posting a message on Twitter calling himself a "stress free kind of guy," prosecutors said.

Defense lawyer Judy Clarke, who has saved some of America's most notorious convicts from the death penalty, said Tsarnaev deserved to be condemned but that the attacks would never have happened without Tamerlan.

"For this suffering, destruction and profound loss there is no excuse. No one is trying to make one," she said.

Tamerlan built the bombs, murdered Collier, downloaded the bomb-making instructions, brought the ingredients, the backpacks and his fingerprints were all over the evidence, Clarke said.