Obama drops Cuba from list of state sponsors of terrorism 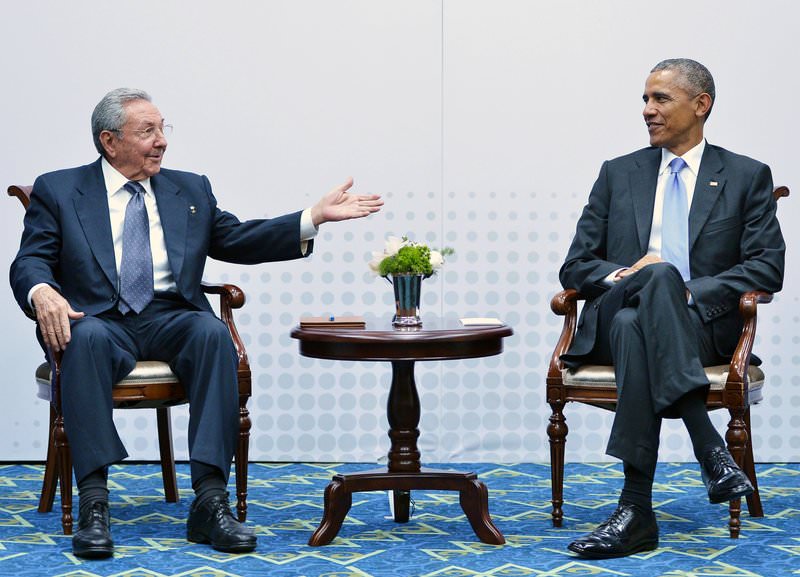 Cuba's President Raul Castro (L) speaks during a meeting with US President Barack Obama on the sidelines of the Summit of the Americas on April 11, 2015 in Panama City (AFP Photo)
by French Press Agency - AFP Apr 14, 2015 12:00 am
The White House has announced on Tuesday that President Barack Obama is taking Cuba off a list of state sponsors of terrorism, a key step to normalize relations between the two countries.

Obama submitted a report to Congress indicating his "intent to rescind" Cuba's inclusion on the list, which had been a major barrier to establishing embassies in Washington and Havana.

"The government of Cuba has not provided any support for international terrorism during the preceding six-month period," Obama said in a notification to Congress.

Lawmakers now have 45 days in which they can oppose the decision.

"While no fan of the Castro regime, I continue to believe that opening up the island to American ideas, vibrancy, and trade is the most effective way to see a more open and tolerant Cuba," he said.

If the redesignation is successful, Cuba would again have access to the US banking system, allowing an embassy to be opened and paving the way for further trade between the Cold War foes.

The move comes three days after Obama held an hour of talks with Raul Castro, the first meeting between a Cuban and US president in a half-century.

Cuba was first put on the list, which also includes Syria, Sudan and Iran, in 1982 for harboring ETA Basque separatist militants and Colombian FARC rebels.