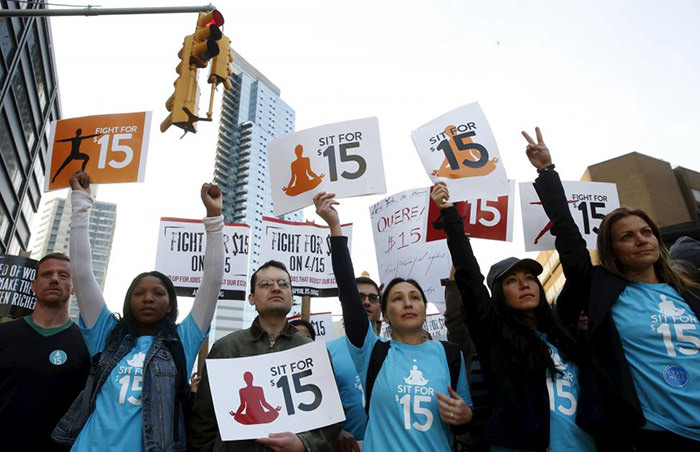 The latest wave of protests to press for pay increases to $15 an hour was expected to kick off in New York at dawn outside a McDonald's in Brooklyn, pick up momentum during the day and culminate in a march to Times Square during the evening rush hour, organizers said.

Fast-food workers will walk off the job and be joined at protests by students from 200 colleges and activists from the Black Lives Matter movement, which protests police brutality, they said.

The campaign by low-wage workers for higher pay has been building for several years as they protest that the U.S. federal minimum wage of $7.25 an hour is not enough to lift them from poverty. Fast-food and retail chains are starting to respond, but their wage increases are generally below the level organizers are demanding.

McDonald's said it would raise pay at company-owned stores to $9 an hour, though that would not necessarily apply to the more than 90 percent of its 14,000 U.S. locations operated by independent franchisees.

The debate over the U.S. minimum wage is expected to emerge as a key issue in the run-up to the 2016 presidential election. Democratic presidential candidate Hillary Clinton this week said it was unfair that many American families are facing financial hardship "when the average CEO makes about 300 times what the average worker makes."

Organizers said they chose to mobilize on April 15, the U.S. deadline for filing income tax returns, to highlight their complaint that many workers are forced to rely on public assistance to live.

"On Tax Day, fast-food workers from Pittsburgh to Pasadena will walk off the job, while adjunct professors, home care, child care, airport, industrial laundry and Walmart workers will march and rally in what will be the most widespread mobilization ever by U.S. workers seeking higher pay," organizers said in a statement.