Obama not to invite Netanyahu to White House: Report 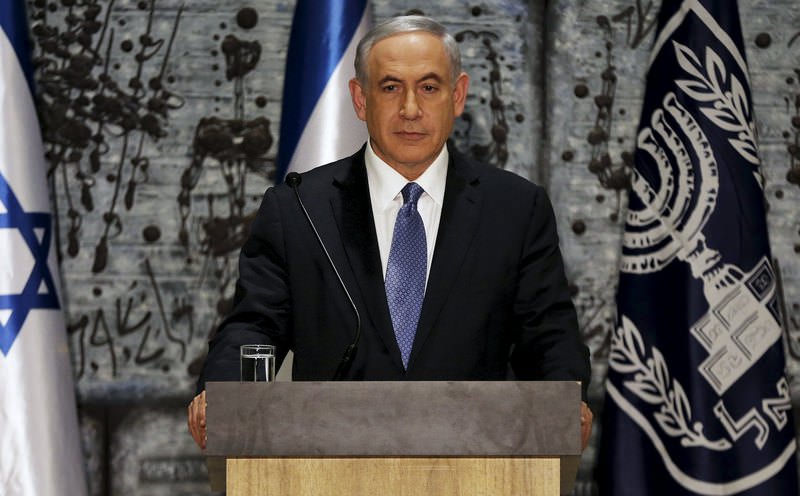 |Reuters Photo
by Yusuf Selman İnanç Apr 23, 2015 12:00 am
U.S. President Barack Obama met with Jewish-American leaders two weeks ago at the White House in order to assure them that he shares their concerns over Israel's security and the threat posed by Iran's nuclear programs. The attendees were quoted by the Washington Post as saying positive things about the meeting. One person who attended the first meeting called the session "positive" and said Obama was "heartfelt about his connection to Israel; very moving." Another said, "The president talked about how deeply he feels about Israel, the Jewish people and anti-Semitism. It was not just about Iran. It was much, much deeper in terms of the president sharing with us how he felt." "All of us begin with a sense of skepticism knowing what Iran is. A lot of questions were asked. How would this deal with this, how it would this deal with that?" one Jewish leader said.

After Israeli Prime Minister Benjamin Netanyahu was re-elected and the meeting signaled a positive step forward, it was expected that relations between the U.S. and Israel would return to normalcy. However, tensions have not disappeared as The New York Times reported that Obama will not invite Netanyahu to the White House until after the Iran talks, since Tel Aviv ardently opposed the nuclear talks and claim that Tehran poses a national security threat to them.

"As Obama sat with Jewish leaders in the White House last week, trying to reassure them of his deep commitment to Israel, some wanted to know whether he would soon invite Netanyahu for an in-person visit. Not yet, Obama responded. He told the group that a face-to-face meeting at the White House would probably end with Netanyahu publicly venting his complaints about the president's policies, particularly his efforts to forge a nuclear agreement with Iran, according to people familiar with the private meeting who would provide details about it only on the condition of anonymity," the newspaper reported. The newspaper then quoted Obama as he told the meeting's participants he would talk to Netanyahu over the phone.

The rising tensions between the two historically allied leaders, which have surfaced recently, resulted from a series of diplomatic confrontations that has contributed to the souring of relations. In addition, it is no secret that Netanyahu and Obama have not been the closest of friends, as one would expect from leaders of the states that are such strong allies. In 2009, Obama's Cairo speech, which he gave during his Middle East tour in an attempt to build relations with the Muslim community, could be pointed to as the spark that ignited tensions between him and Netanyahu. Obama said the U.S. "does not accept the legitimacy of the continued Israeli settlements" on the Palestinian lands that were occupied during the Six-Day War in 1967. Such remarks were not received well by the Israelis, as the issue is one of the most sensitive in the region, raising tensions specifically for the Israelis and also the Middle East in general.

After these remarks, Israel's decision to build settlements in East Jerusalem during U.S. Vice President Joe Biden's visit in 2010 stirred the pot even further. Biden questioned the decision, but was left without an answer as Netanyahu refused to take the blame for the illegal settlements. The tension that had been prompted by the Cairo speech resurfaced during Netanyahu's visit in March 2011 when he tried to put forward his discomfort with Obama's comments on the 1967 borders, embarrassing the president. Tension between the two allies continued to surface as Obama was overheard at the November 2011 G20 summit in France commenting to French President Nicholas Sarkozy, "You're fed up with him, but I have to deal with him every day." Such remarks destroyed Obama's attempts to reestablish relations with Netanyahu by voting against the Palestinian bid for statehood at the U.N. in September 2011. Netanyahu's unwillingness to build relations with Obama reached a new level when he supported the Republican Mitt Romney election campaign against Obama during the 2012 presidency elections in the U.S.

Obama's re-election as president was perceived as an opportunity to reset relations, as he attempted to normalize relations by describing the criticism of their relations and disagreement on the Iranian issue as "speculation" during his visit in March 2013. Israel's attacks on Hezbollah could also be analyzed as a resurfacing of Netanyahu's disagreement with Obama in his approach to Iran's nuclear program. Obama's willingness to reach agreements with Iran through diplomatic talks contrasts with Netanyahu's attempt to start an armed conflict against them, a country which Israel sees as its biggest rival in the Middle East. Despite the U.S.'s efforts to launch peace talks between Israel and the Palestinian Authority, Israel's attacks on Gaza in July 2014, which killed more than 2,000 civilians, and the diplomatic crisis that emerged between the Pentagon and the White House on sending arms to Israel, reheated the already boiling water.

In June 2014, three Israeli boys went missing and Israel attacked Gaza, blaming the Palestinians for their loss. The Obama administration condemned the losses and supported Israel's attempts to find the boys. However, they also condemned the burning of a Palestinian, Muhammad Abu Khudayr, as revenge by the far-right extremist Israelis. The ongoing Israeli forces' attack on the West Bank was responded to by Hamas. In July 2014, Israel launched a full-fledged attack on Gaza, killing more than 2,000 civilians and destroying many structures in the city. Although the U.S. administration kept silent on the Gaza attacks, the attack on a U.N's school building was responded to with harsh criticism. Furthermore, the media revealed through senior Obama officials that the Pentagon had sent ammunition to Israel, which became a significant moment for the Gaza confrontation between Israel and Hamas.