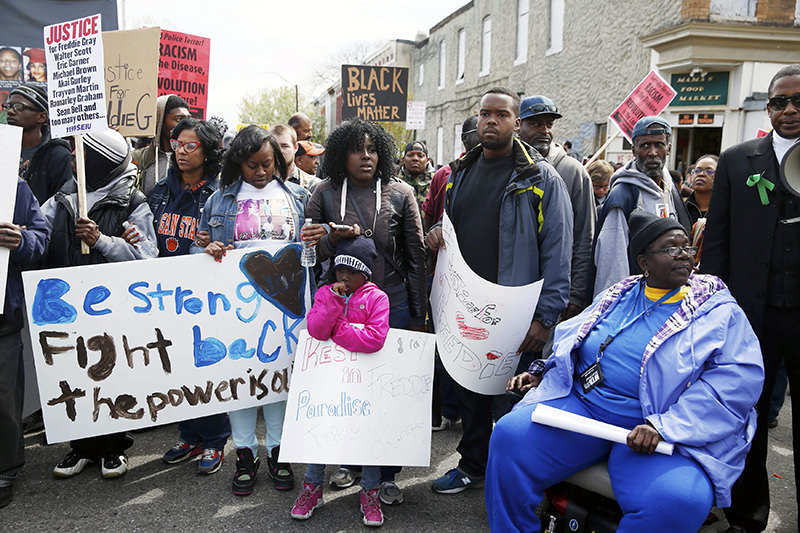 | Reuters Photo
by Daily Sabah with Wires Apr 25, 2015 12:00 am
The continuing coverage of police killing black men in the United States has triggered a public outcry over the use of force by law enforcement against African-Americans. The latest case of 25-year-old Freddie Gray led many people to take to the streets of Baltimore, leading to confrontations between the black community and police. The racially charged protests across the country have shaken the United States, as more people demand justice and an end to discrimination against black Americans.

In an effort to draw attention to U.S. police brutality toward the black community, thousands of people joined demonstrations over the weekend. The unexplained death of a black man in police custody resulted in severe clashes between police and some small group of protestors. After a peaceful march to City Hall demanding answers to the unexplained death of Freddie Gray, 12 people, who threw bottles, metal barricades and other objects at police officers and their cruisers, were arrested on Saturday night.

Gray died April 19 after suffering a fatal spinal injury while in custody. He was not the first black man to die by the hand of police or in police custody. Police confronted Gray outside a crime-ridden public housing project where cellphone video recorded by bystanders showed him being pinned to the ground howling in apparent pain. "That is where the apprehension of Freddie Gray occurred and, quite frankly, that is exactly where Freddie Gray should have received medical attention, and he did not," said Deputy Commissioner Kevin Davis, who is overseeing the police investigation. Gray was then seen hustled into a police van that made several stops en route to the Western District police station, from where an ambulance rushed him to a shock trauma unit. He died seven days later with 80 percent of his spine severed at the neck, lawyers for his family said.

Police brutality targeting black men is widely known in New York, including the case of Eric Garner, and the fatal shooting of the unarmed teenager Michael Brown in August in the St. Louis suburb of Ferguson. Garner died after a New York police officer put him in a chokehold during an arrest. A white officer named Daniel Pantaleo applied the chokehold while trying to arrest Garner on July 17 in the New York borough of Staten Island on suspicion of illegally selling cigarettes.

The Midwestern town of Ferguson was hit by violent protests following the fatal police shooting of Brown on Aug. 9. Since then, tensions have been simmering in the violence-hit town even though a sense of normalcy has reportedly begun to settle back in the city. In addition to Ferguson, the Ohio shooting further raised tensions. The Ohio police shooting of another young black American named Tamir Rice on Nov. 17 further fuelled racial tension in the country. Many have called for the reform of police practices, especially toward black Americans, a new police chief in Ferguson and a national law to prevent racial profiling by police during protests.