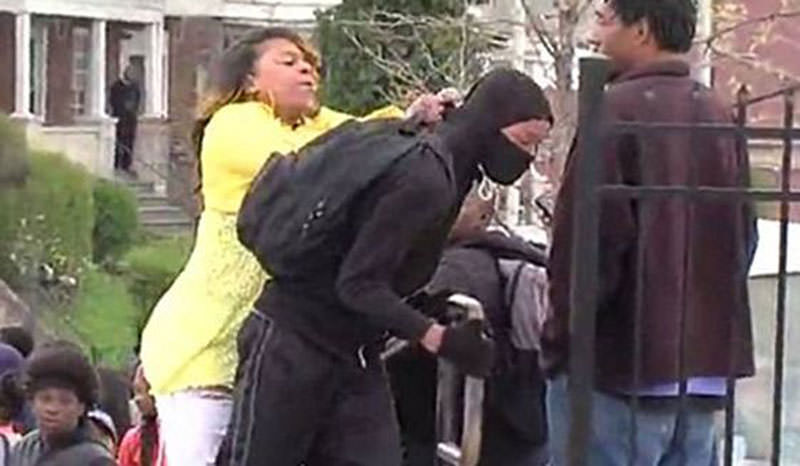 | Photo from Twitter
by reuters Apr 29, 2015 12:00 am
A woman captured on video slapping her teenage son for taking part in the Baltimore riots, a reprimand that went viral online on Tuesday, won praise from the city's police commissioner and was heralded on social media as "Mom of the Year."

She was videotaped by Baltimore television WMAR on Monday chasing a teenager, clad in a hoodie with his face covered, beating him and demanding he "take that fucking mask off."

They were identified by CBS News as Toya Graham and her 16-year-old son Michael.

Graham said in an interview that she pulled her son away from the crowd because "at the end of the day, I don't want him to be a Freddie Gray," according to CBS News.

Baltimore's violent unrest erupted after the funeral on Monday of Gray, a 25-year-old black man who died in police custody.

The Baltimore station that originally videotaped Graham said she saw her son throwing rocks while watching coverage of the mayhem and ran out to stop him.

Police Commissioner Anthony Batts praised her as "one mother who grabbed her child who had a hood on his head and she started smacking him on the head because she was so embarrassed," the station reported.

"I wish I had more parents that took charge of their kids out there tonight," he said.

The woman's insistent pursuit of the boy went viral online, and it won applause from Fox News contributor Charles Payne, who called her "Mom of the Year" on Twitter. His comment was marked as a favorite by hundreds of people.