Tornadoes tear through central US, over a dozen reported to be injured 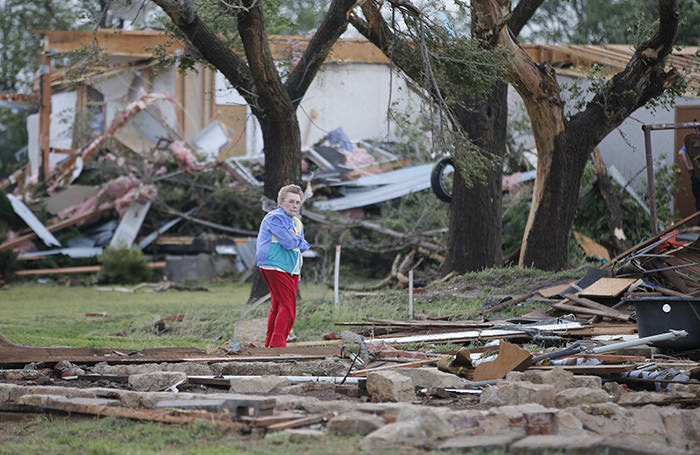 |AP Photo
by French Press Agency - AFP
May 07, 2015 12:00 am
Multiple tornadoes injured at least 13 as they tore through the central United States on Wednesday destroying homes and felling trees amid heavy rains that triggered local flooding, US media reported.

At least 13 people were injured when a tornado tore through a mobile home park in Oklahoma City, CNN reported, quoting Susie Patterson of the Emergency Medical Services Authority in Oklahoma City.

The Weather Channel said at least 29 tornado sightings had been reported across the states of Kansas, Nebraska, Texas and Oklahoma, where multiple homes were destroyed.

Footage from a local affiliate broadcast on CNN showed significant destruction in the state, including a building ravaged by the storm system, with belongings scattered across a lawn.

Cars were flipped into the air on an interstate highway, The Oklahoman Newspaper reported.

A zoo called Tiger Safari in the town of Tuttle was also hit, and initially the county sheriff's office said some animals were on the loose, but they were later accounted for, the paper said.

"Severe weather will remain a daily threat for the Plains and Midwest through (the) weekend thanks to a stubbornly slow-moving weather pattern across North America," The National Weather Service said.

"Tornado watches have been issued for parts of Nebraska, Kansas, Oklahoma and Texas. In those watch areas, several tornadoes have been reported," it added.

The city of Norman also took a hit with the I-35 highway shut down due to downed power lines, the report said.

An image from the local newspaper, The Norman Transcript, showed part of the exterior of the city's Norman Hotel ripped off by a tornado.
Last Update: May 07, 2015 11:06 am