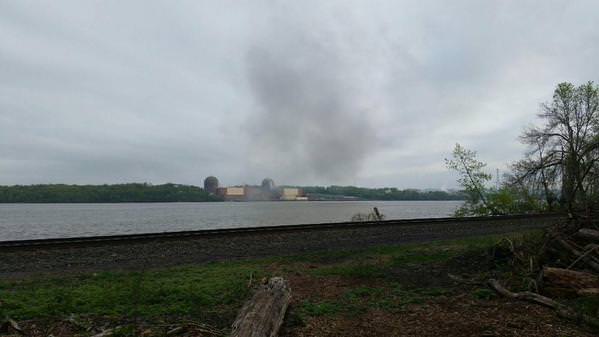 by Daily Sabah with Wires May 10, 2015 12:00 am
A transformer exploded at the Indian Point Nuclear Power Facility in Westchester disctrict of New York, on Saturday, police said.

There were no reports of injuries in the blast and resulting fire, which Indian Point Energy said was caused by a "transformer failure."


Indian Point safely shut down following transformer failure outside of nuclear side of plant; No danger to public health and safety.

The fire has since been put out and there are no ongoing emergency threats, according to the officials.

Indian Point Energy said there was no danger to employees or the public and that Unit 3 of the facility safely shut down as designed after the transformer failed.

"Saw a huge ball of black smoke and then alarms audible across the river," said Gustavus Gricius, who witnessed the explosion.

Dave Lochbaum, who is the director of the Nuclear Safety Project, said the transformer is in the switch yard outside the plant, but within the security perimeter.

He said oil is used to cool the transformers and that an electrical short may have caused the explosion.

"Transformer explosions are not uncommon -- they happen roughly three or four times a year across the industry," he added.
Last Update: May 10, 2015 2:29 pm
RELATED TOPICS