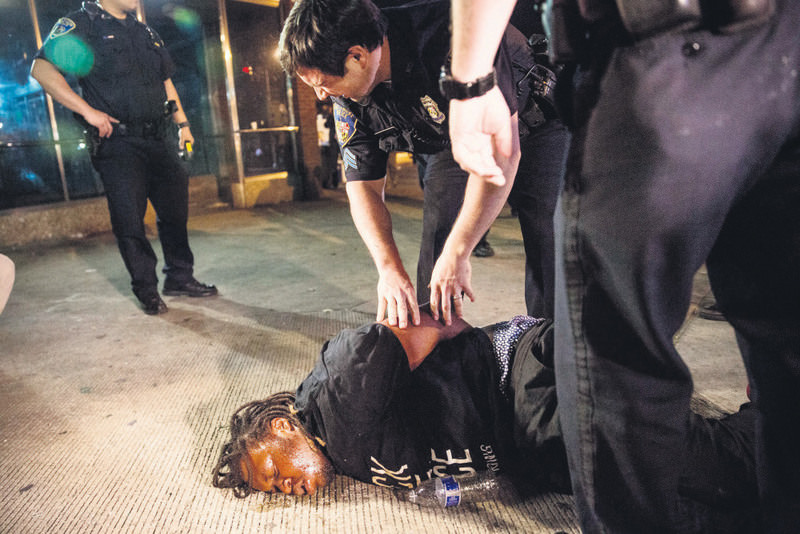 by Büşra Akın Dinçer May 10, 2015 12:00 am
On April 30, Karen Attiah, the deputy opinions editor for The Washington Post, wrote an opinion piece called "How Western media would cover Baltimore if it happened elsewhere." Her article was intended to set out an example of a news script written in the specific language that Western media uses to cover stories that take place in countries in other parts of the world.

The article begins: "International leaders expressed concern over the rising tide of racism and state violence in America, especially concerning the treatment of ethnic minorities in the country and the corruption in state security forces around the country when handling cases of police brutality. The latest crisis is taking place in Baltimore, Maryland, a once-bustling city on the country's Eastern Seaboard, where an unarmed man named Freddie Gray died from a severed spine while in police custody."

In her article, Attiah lays out the double standards that apply when Western media outlets report on events that happen in countries other than their own. Speaking to Daily Sabah, Attiah explained the reasons why she wanted to write the article.

"I can't say there was a specific example that gave me this idea other than the images from Ferguson and Baltimore, and the police in heavy riot gear, using tear gas, and how those images reminded me, and many others, of war zones and unrest we see in other countries like Egypt and Gaza. Too many Americans liked to say: 'This doesn't look like America!' My response is, this is exactly America. We need to face our own reality, as uncomfortable as it is. It's sad, and maddening, especially as a black woman living in this country."

Attiah says that when thousands of people protested in the streets of Ferguson and Baltimore the media crackdown and police brutality were beyond words.

"Ferguson was the first time that Amnesty International deployed a human rights abuses team inside the U.S. to document the unrest. That's how bad it was. Journalists being tear gassed and arrested. Cameras being dismantled, no-fly zones for news helicopters … I mean it was shocking. That was a huge wakeup call."

Attiah said she clearly remembers how American media closely monitored the developments in Turkey during the Gezi Park protests and praised the protesters. However, she said the same media outlets could not do the same when it comes to the U.S.

"Why did we call those in other countries brave people agitating for freedom when those in the U.S. that march for justice and accountability are thugs/rioters? We also romanticize these events in faraway lands but seem to have a much harder time with our own social justice movements here at home. Even those here that followed the protests in Turkey against repression and media crackdowns lauded the protesters, I remember, and how social media played a role. But what about our own?"

As a journalist, Attiah said the media's approach plays a critical role in shaping perception. She said Western media needs to stop alienating other regions from the West and cover all stories with a global perspective.

"I think sometimes double standards arise when we divide the world into 'us versus them' or the 'West versus the rest.' With this piece, I wanted to break those divisions down and place what is happening in American into the global conversation about democracy, human rights, racism/ethnicity and transparency in the justice system. Too often we use those words to talk about other countries, but we are facing these challenges right here at home."

Freddie Gray, a 25-year-old African-American, was arrested in Baltimore, Maryland on April 12. While being transported to the station in police custody, he fell into coma and was taken to hospital. He was suffering from a severed spine and died within a week. His death triggered protests across the U.S. Baltimore State Attorney Marilyn Mosby has charged the six police officers involved with crime ranging from murder to manslaughter and dereliction of duty.
Last Update: May 11, 2015 11:20 am
RELATED TOPICS