US admits failure of commitment to civil rights 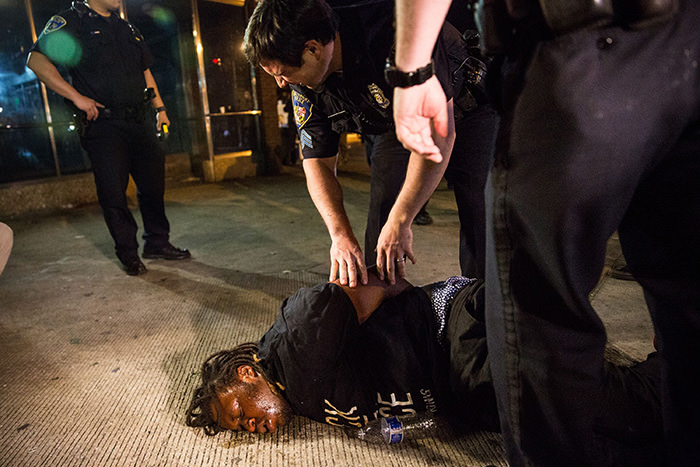 |AFP Photo
by May 11, 2015 12:00 am
The United States acknowledged before the UN on Monday that it has not done enough to uphold civil rights laws, following a string of recent killings of unarmed black men by police.

Speaking before the United Nations Human Rights Council, a US representative stressed the advances his country had made in establishing a range of civil rights laws since segregation ended more than half a century ago.

But a number of recent cases of police brutality against African Americans shows "we must rededicate ourselves to ensuring that our civil rights laws live up to their promise," said James Cadogan, a senior counselor in the justice department's civil rights division.

"The tragic deaths of Freddie Gray in Baltimore, Michael Brown in Missouri, Eric Garner in New York, Tamir Rice in Ohio, and Walter Scott in South Carolina have... challenged us to do better and to work harder for progress," he said.

The United States was undergoing a so-called Universal Periodic Review of its rights record - which all 193 UN countries must submit to every four years.

The US delegation, headed by US ambassador to the council Keith Harper and acting US legal advisor Mary McLeod, faced a barrage of questions about police tactics and brutality as well as the disproportionate impact on minorities.

Namibia representative Gladice Pickering urged Washington to "collaborate closely with marginalised communities to fix the broken justice system that continues to discriminate against them despite recent waves of protest over racial profiling and police killings of unarmed black men."

The half-day review in Geneva came after the US justice department on Friday launched a federal civil rights investigation into whether police in Baltimore have systematically discriminated against residents, following the death of 25-year-old Freddie Gray in police custody last month.

Six police officers have been charged in connection with Gray's arrest and death. One faces a second-degree murder charge.

"When federal, state, local or tribal officials willfully use excessive force that violates the US Constitution or federal law, we have the authority to prosecute them," Cadogan stressed, pointing to criminal charges brought against more than 400 law enforcement officials over the past six years.

During Monday's review, many of the 117 country representatives who took the floor also criticised the continual use of the death penalty in the United States.

Sweden's representative Anna Jakenberg Brinck was among many to demand a "national moratorium on the death penalty aiming at complete abolition."

Others, including France, also called for "full transparency" in the types of drugs being used to carry out executions, following several recent botched executions.

The United States has seen its execution numbers drop in recent years to 35 in 2014, but still ranks fifth in the world after China, Iran, Saudi Arabia and Iraq, according to Amnesty International.
The issue of US counter-terrorism operations and targeted drone killings was also raised, with Pakistan's representative demanding compensation for all innocent victims of such strikes.

The CIA's drone campaign targeting Al-Qaeda and Taliban militants in restive northwest Pakistan has long been highly controversial. The latest debate came after Washington acknowledged that a drone strike in January had killed an American and an Italian held hostage.

The issue of mass surveillance systems brought to light in documents leaked by former National Security Agency (NSA) contractor Edward Snowden, was also raised, as was widespread detention of illegal immigrants, including children.

On the agenda on Monday was Washington's record on addressing its "war on terror" legacy, including its failure to close the Guantanamo Bay detention centre in Cuba and CIA torture revelations.

Denmark's representative called for "all victims of torture or ill treatment, whether still in US custody or not, (to) obtain redress and have an enforceable right to fair and adequate compensation."

McLeod reiterated US President Barack Obama's admission that the country had "crossed the line" in allowing past cases of CIA torture, detailed in an explosive Senate report published last December.

But, she stressed that Washington had since taken steps to ensure that the country "never resorts to the use of those harsh interrogation techniques again.
Last Update: May 11, 2015 3:47 pm
RELATED TOPICS