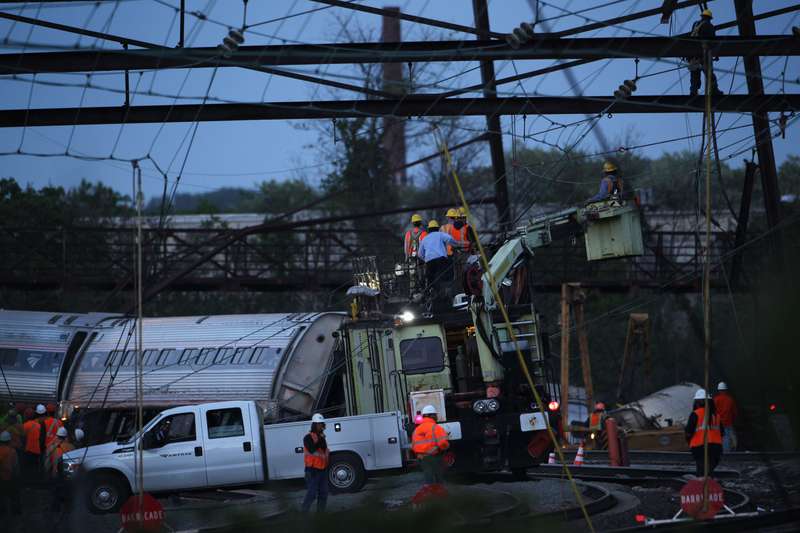 by Associated Press May 14, 2015 12:00 am
The engineer in this week's deadly train derailment doesn't remember the crash, the lawyer said on Thursday, complicating the investigation into why the Amtrak passenger train was going more than twice the allowed speed when it shot off a sharp curve.

With an unidentified eighth body found in the wreckage on Thursday, it was the deadliest U.S. train accident in nearly six years. The Philadelphia mayor said all passengers and crew were now accounted for.

Questions grew about why a track technology that would have prevented the train from going over the speed limit Tuesday night had not yet been installed as planned.

The 32-year-old engineer, Brandon Bostian, has so far refused to speak with police.

"He remembers coming into the curve. He remembers attempting to reduce speed and thereafter, he was knocked out," Robert Goggin told ABC. He said the last thing Bostian remembered was coming to, looking for his bag, retrieving his cellphone and calling for help.

Goggin said his client, who suffered a concussion and had 14 staples in his head, was distraught when he learned of the devastation. He said his client "cooperated fully" with police and immediately consented to a blood test and surrendered his cellphone. He believes his client's memory will likely return once the head injury subsides.

The derailment happened along the country's busiest rail corridor between Washington and Boston, where the national passenger railway carries 11.6 million passengers a year. Amtrak suspended all service until further notice along the Philadelphia-to-New York stretch, forcing thousands of people to find other ways to travel.

The train was moving at 106 mph (170 kph) before it ran off the rails along a sharp curve where the speed limit drops to just 50 mph (80 kph), federal investigators have said.

The engineer applied the emergency brakes moments before the crash but slowed the train to only 102 mph (164 kph) by the time the locomotive's black box stopped recording data, said Robert Sumwalt, of the National Transportation Safety Board. The speed limit just before the bend is 80 mph (128 kph), he said.

Despite pressure from Congress and safety regulators, Amtrak had not installed along that section of track a technology that uses GPS, wireless radio and computers to prevent trains from going over the speed limit. Amtrak had said it expected to finish installing positive train control technology throughout its Northeast Corridor by the end of 2012.

Amtrak officials didn't reply to questions from The Associated Press about why the technology wasn't on the Philadelphia tracks.

"Based on what we know right now, we feel that had such a system been installed in this section of track, this accident would not have occurred," Sumwalt said.

Sumwalt said federal accident investigators want to talk to the engineer but will give him a day or two to recover from the shock of the accident.

Mayor Michael Nutter told CNN there was "no way in the world" the engineer should have been going that fast into the curve and called him "reckless and irresponsible." Sumwalt said Nutter's comments were "subjective" and said investigators are not making any "judgment calls."

More than 200 people aboard the Washington-to-New York train were injured in the crash. Passengers crawled out the windows of the toppled rail cars, many of them with broken bones and burns.

Dr. Herbert Cushing, Temple's chief medical officer, said 16 of the injured remained in the hospital and eight remain in critical condition. He said all are expected to recover.

The mayor said some people were unaccounted for but cautioned that some passengers listed on the Amtrak manifest might not have boarded the train, while others might not have checked in with authorities.

Amtrak inspected the stretch of track on Tuesday, just hours before the accident, and found no defects, the Federal Railroad Administration said. Besides the data recorder, the train had a video camera in its front end that could yield clues to what happened, Sumwalt said.
Last Update: May 15, 2015 11:12 am
RELATED TOPICS