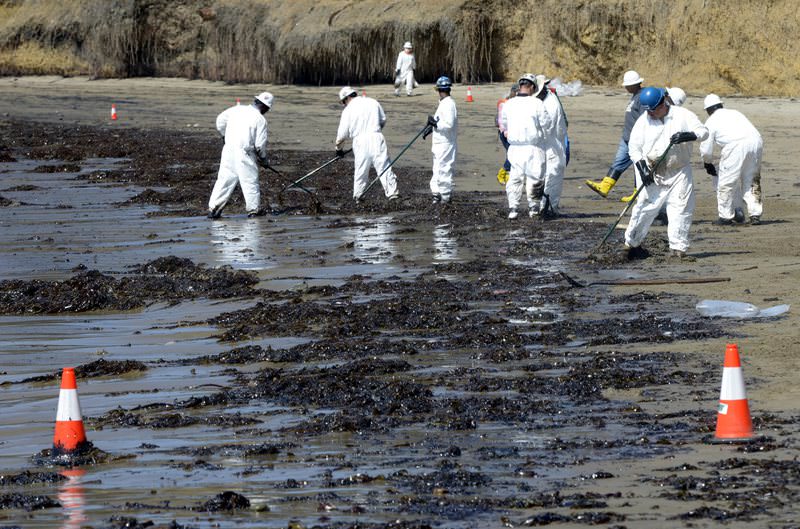 by Daily Sabah with Agencies May 21, 2015 12:00 am
An oil spill that fouled beaches and threatened wildlife along a scenic stretch of the California coast spread across 9 miles of ocean Wednesday as cleanup efforts began and federal regulators investigated how the pipeline leaked.

Workers in protective suits raked and shoveled stinky black goo off the beaches, while boats towed booms into place to corral the two slicks off the Santa Barbara coast where a much larger spill in 1969 — the largest in U.S. waters at the time — is credited with giving rise to the American environmental movement.

The amount of oil released in the latest spill was unknown, but the pipe was carrying 84,000 gallons an hour before the leak was detected, suggesting more oil escaped than the 21,000 gallons initially estimated.

It took three hours to shut down the pipe Tuesday, but officials didn't say how long it leaked beforehand or discuss the rate at which oil escaped the pipe.

Federal regulators from the Department of Transportation, which oversees oil pipeline safety, investigated the leak's cause, the pipe's condition and the potential regulatory violations.

The 24-inch pipe built in 1991 had no previous problems and was inspected about two weeks ago, though results of that inspection had not been analyzed yet, said Darren Palmer, a district manager with the company that owns the pipe, Plains All American Pipeline LP.

"Plains is taking responsibility and paying for everything associated with this spill," Palmer said.

Still, tourists were drawn to pull off the Pacific Coast Highway to eye the disaster from overlooking bluffs.

"It smells like what they use to pave the roads," said Fan Yang, of Indianapolis, who was hoping to find cleaner beaches in Santa Barbara, about 20 miles away. "I'm sad for the birds — if they lose their habitat."

Environmental damage was anticipated, but dead fish and oily birds had not been found in the calm seas or rocky coast by late morning, said Capt. Mark Crossland of the state Department of Fish and Wildlife.

The department closed fishing and shellfish harvesting for a mile east and west of Refugio beach and it deployed booms to protect the nesting and foraging habitat of the snowy plover and the least tern, both endangered shore birds, a spokeswoman said.

Members of the International Bird Rescue were prepared to clean any birds covered with oil.

Environmental groups used the spill as an opportunity to take a shot at fossil fuels and remind people of the area's notoriety with oil spills.

Large offshore rigs still dot the horizon off the coast, pumping crude to shore. The leak occurred in a pipe that was carrying crude from an onshore facility to another point in the chain of production that eventually leads to a refinery.

The oil spilled into a culvert running under a highway and into a storm drain that emptied into the ocean.

The spill was not expected to affect gas prices, even though the pipeline was out of operation for now, said Tom Kloza, global head of energy at the Oil Price Information Service.

In fact, Californians probably will see high prices drop a bit because the price of crude has dropped 60 cents in the past week, Kloza said.
Last Update: May 21, 2015 1:42 am
RELATED TOPICS