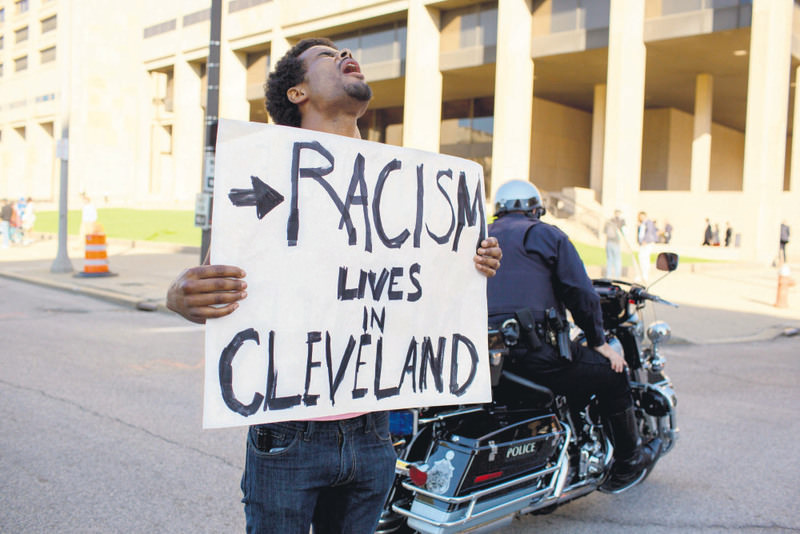 by May 24, 2015 12:00 am
A Cleveland police officer was found not guilty on Saturday in the shooting deaths of an unarmed black man and a woman after a high-speed car chase in 2012, one in a series of cases that have raised questions over police conduct and race relations in the United States. Judge John O'Donnell said Officer Michael Brelo, 31, acted reasonably in shooting the two suspects while standing on the hood of their surrounded car and firing multiple rounds through the windshield. Brelo, who was among a group of officers who fired on the car, was found not guilty of voluntary manslaughter and aggravated assault. Protesters took to Cleveland streets on Saturday night as police patrolled in riot gear. Cleveland police spokeswoman Jennifer Ciaccia said that more than 20 people had been arrested. Brelo's trial, which began on April 6, took place at a time when U.S. law enforcement is under scrutiny for the use of lethal force against minority groups. It followed a series of high-profile deaths of unarmed black men in confrontations with police, which have prompted sometimes violent demonstrations. The two people who were killed, Malissa Williams and Timothy Russell, were black and Brelo, a former Marine, is white. "Brelo was acting in conditions difficult for even experienced officers to imagine," O'Donnell said during the roughly hour-long reading of the verdict. "He was in a strange place at night surrounded by gunfire, sirens and flashing bulbs. Brelo did not fire too quickly or at a person who was clearly unarmed or unable to run him over," he added.

Soon after the verdict, a small crowd of demonstrators took to the streets chanting "No justice, no peace," with protests becoming larger and more unruly. Police said on Twitter there was an incident with a large crowd with people spraying others with pepper spray. Police arrested at least three people at a restaurant after someone threw an object through a window and injured a customer. Reaction to the verdict was swift on social media, with many saying they were bewildered. U.S. Representative Marcia Fudge, a Democrat from Ohio, called the decision a "stunning setback on the road to justice." "The verdict is another chilling reminder of a broken relationship between the Cleveland Police Department and the community it serves," she said in a statement. "Today we have been told – yet again – our lives have no value," added Fudge, who is African-American. The U.S. Justice Department said its civil rights division, the U.S. attorney's office and the FBI were reviewing testimony and evidence from the state trial and would determine if federal action would be taken. "While the law and the court ... found him not guilty, we feel that he was culpable and he was far from innocent, as was the city of Cleveland in their role in this situation," Paul Cristallo, an attorney for Russell's family, told a news conference.

Brelo's attorney, Patrick D'Angelo, described prosecutors as "ruthless" for pursuing the charges against his client. "It was classically a case of David vs Goliath," he said. The trial came months after the Justice Department found the Cleveland Police Department systematically engages in excessive use of force against civilians. It launched the investigation after a series of incidents, including the Brelo case. The department, in a December report, found that supervisors tolerated and in some cases, endorsed use of unnecessary or unreasonable force. Just days before the report was released, a Cleveland police officer shot and killed Tamir Rice, a 12-year-old boy who was carrying what turned out to be a replica gun that typically fires plastic pellets. The shooting is under investigation.

Ahead of Saturday's verdict, Cleveland officials braced for demonstrations, concerned about flashes of violence that erupted in Baltimore and Ferguson, Missouri, after fatal shootings of unarmed black men. Six officers involved in the Baltimore incident in April have been indicted, while a Missouri grand jury decided against bringing charges against the officer who fatally shot Michael Brown in Ferguson last August. Mayor Frank Jackson said he hoped Cleveland would stay peaceful. "Actions that cross the line, either by police officers or citizens, cannot or will not be tolerated," he said. Five other police supervisors were indicted on misdemeanor dereliction of duty charges in the deaths of Williams and Russell and are scheduled to go on trial in July. Dozens of officers have been disciplined and Cleveland paid the families of Williams and Russell $1.5 million each to settle a wrongful death lawsuit. Brelo, who waived his right to a jury trial, will remain on unpaid suspension until a police review is completed, Cleveland Police Chief Calvin Williams said.

The chase, which started in downtown Cleveland after reports of gunfire coming from the car, went through multiple cities at speeds topping 90 mph (145 kph) and ended with 13 Cleveland police officers firing 137 rounds. Russell was struck 24 times and Malissa Williams 23 times. No weapon was found in the car or along the route. A forensic mechanic testified that the car was prone to backfiring. The judge found Brelo, who climbed on the car's hood once it had been cornered by patrol cars, had acted reasonably in the belief that the suspects were shooting at him and other officers.