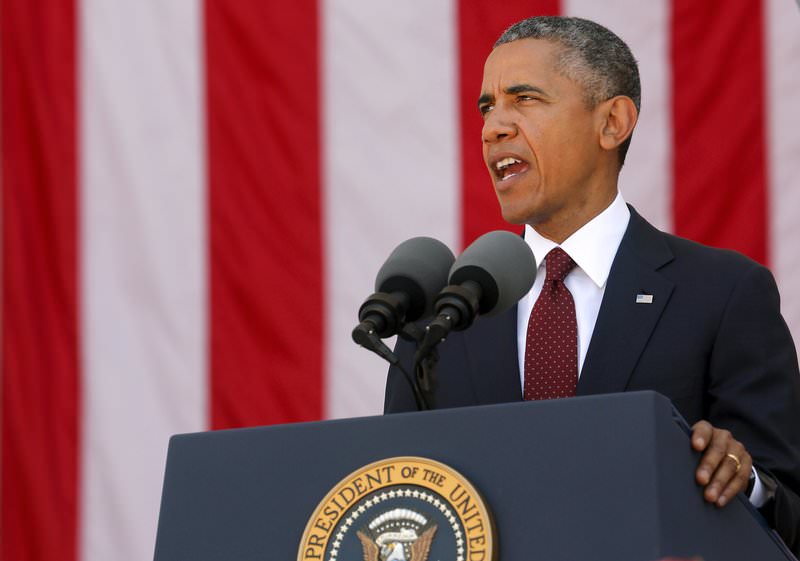 U.S. President Barack Obama delivers remarks at the Memorial Day observance at Arlington National Cemetery in Arlington, Virginia May 25, 2015 (Reuters Photo)
by Compiled from Wire Services May 25, 2015 12:00 am
US President Barack Obama on Monday heralded the first Memorial Day in 14 years that the United States is not engaged in a major ground war during his annual speech at Arlington National Cemetery near Washington.

In his remarks, Obama paid tribute to U.S. military personnel who served in conflicts such as World War II as well as the more recent wars in Iraq and Afghanistan.

"For many of us, this Memorial Day is especially meaningful. It is the first since our war in Afghanistan came to an end," Obama said. "Today is the first Memorial Day in 14 years that the United States is not engaged in a major ground war."

As a Democratic presidential candidate in 2008, Obama sharply criticized the war in Iraq launched by his Republican predecessor, former President George W. Bush.

U.S. forces are now involved in air campaigns against the self-proclaimed Islamic State of Iraq and Sham (ISIS) in Iraq and Syria as well as training missions in Iraq and Afghanistan. The president has been reluctant to relaunch ground operations in Iraq.
Last Update: May 25, 2015 11:55 pm
RELATED TOPICS