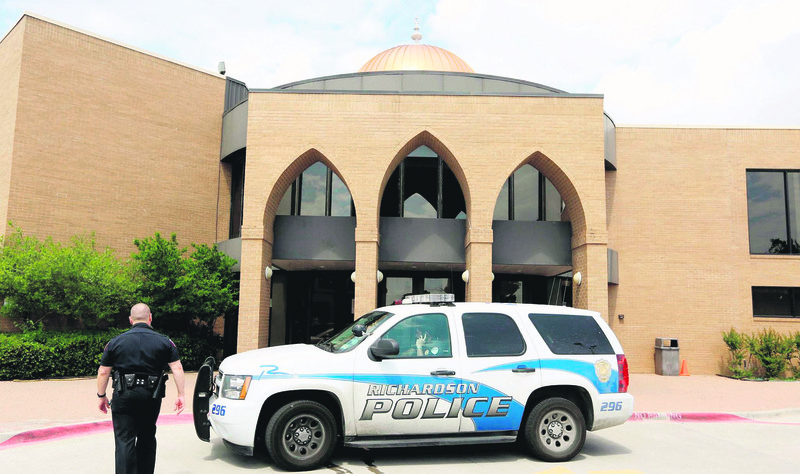 by Daily Sabah May 28, 2015 12:00 am
Islamophobia was on rise particularly after the Sept. 11, 2001, terrorist attacks but its frequency and notoriety has increased in the U.S. during the past decade, Muslim leaders here say. Some even argue that there are those who have a very clear agenda to propagate stereotypes about Islam. The burning of a mosque in Texas and fliers distributed on the streets of Boston demanding that Islamic State of Iraq and al-Sham (ISIS) surrender within 72 hours or Muslims in Europe and the U.S. will be killed are recent examples of anti-Muslims sentiments across the U.S. But while there is an existing discourse in the U.S. that targets Muslims, particularly after the 9/11 attacks, it appears that ISIS has placed added pressure on Muslims. Politicians and religious leaders in Muslim countries have condemned ISIS, which operates in Syria and Iraq, but more than a quarter of Americans and nearly half of senior Protestant pastors say ISIS offers a true representation of Muslims, according to a pair of new surveys conducted earlier this year by LifeWay – a research company. The Washington-based Brooking Institution suggested in February that Americans' hatred toward Islam has grown since the rise of ISIS, and 14 percent of Americans believe the group has the support of the majority Muslims around the world. Ibrahim Hooper, the Communications Director for the Council on American-Islamic Relations (CAIR), a national Muslim civil rights and advocacy organization, said that even after 9/11 there was a reserve of goodwill for American Muslims, so even though Muslims and mosques were attacked, a majority of the American people reacted in favor of Muslims and supported them. But since ISIS has been on the scene "unfortunately we are seeing rising levels of anti-Muslim sentiment in our society", Hooper said.

The prejudice toward Muslims cannot be attributed only to ISIS, he said. "There is also an organized industry promoting Islamophobia in America, founded by millions of dollars and promoted by networks like Fox News and Internet hate sites. So it is created artificially and that is why we get incidents like we saw in New York. Because the individual that planned the attack on the community in New York actually got the idea from the right wing media since it was portrayed as a training camp for terrorists, which is absolutely false in reality," he said. Hooper was referring 63-year-old Robert Doggart who was arrested in April for plotting a deadly attack against a mosque and school in a Muslim village in New York state using guns, explosives and a machete.

In recorded telephone conversations, the former congressional candidate from Tennessee – who admitted his plot in federal court – is heard relating his plan to travel with a small militia group to stage the strike. "We will burn down their buildings (and) if anyone attempts to, uh, harm us in any way, our stand gunner will take them down from 350 yards away. The standoff gunner would be me." A study by UCLA professor Travis Dixon found Muslims are greatly overrepresented as terrorists in U.S. media as compared to FBI reports. The study sampled 146 episodes of news programs focused on breaking news carried by major broadcast and cable networks between 2008 and 2012 and found that among those described as domestic terrorists, 81 percent were identified as Muslim. But in FBI reports from those years, only 6 percent of domestic terror suspects were Muslim.

Naim Beig, the president of the Islamic Circle of North America (ICNA) agreed with Hooper, the CAIR spokesman, that conditions are now ripe for Islamophobia. "There are some people who have a very clear agenda, which is to create and spread stereotypes about Islam. They use media, and the Internet to further their purpose, and unfortunately some of the national politicians also listen to what they are saying." The U.S. Council of Muslim Organizations President Oussama Jammal relates the rise of the Islamophobia with the increase of right wing individuals and groups in the U.S. and Europe. Their appearance in the western world affects Muslims, Jammal said. It is a development that "is not helping to bring harmony and good relationship among different religious groups", he said. Stereotypes about Muslims and Islam are "based on misinformation and ignorance, and sometimes is created intentionally when allegations are made without willingness to listen to the other party", he said. The solution to rising Islamophobia is the education of non-Muslims and introducing them to "true Islam" and the true profile of Muslims, as an alternative to mainstream media stereotypes, Muslim community leaders said. "If people interact with Muslims in their daily life – with Muslim school teachers, bus drivers, store cashiers, and if they get to know these people in their daily life, prejudice would go down," said Hooper, who added that CAIR encourages mosques to engage more actively in their communities in education campaigns. Last weekend, nearly 30,000 attendees, including non-Muslims, gathered for ICNA's annual convention in Baltimore. The conference was designed to highlight Islam's Prophet Muhammad. "We must tell Americans why we love the prophet so much and that he was good to his family, his children and his wives. This is how Americans will get a different picture of the prophet," Beig said.
Last Update: May 28, 2015 10:54 pm
RELATED TOPICS