Thousands walk for 'reconciliation' in Canada 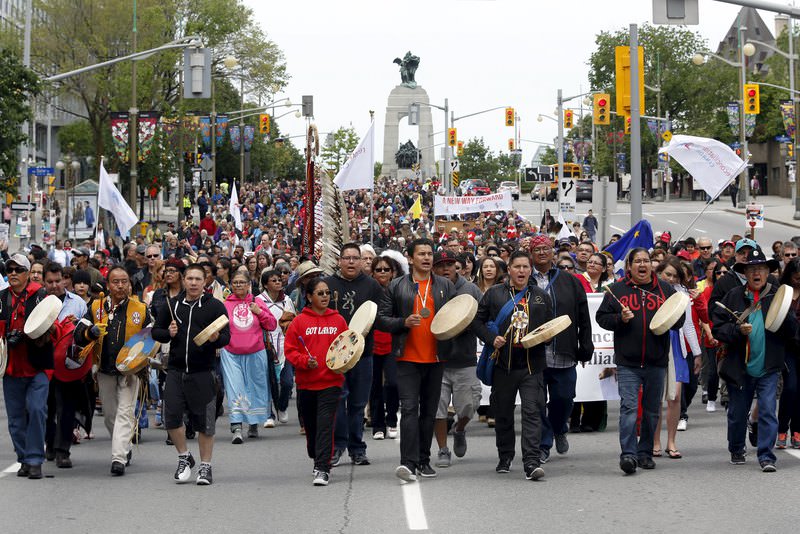 by Daily Sabah with AA Jun 01, 2015 12:00 am
An estimated 7,000 to 10,000 people walked from Gatineau, Quebec, to downtown Ottawa Sunday in a bid to draw attention to the relationship between aboriginal people and other Canadians.

The 4.7-kilometer walk marks the beginning of a series of week-long events as the Truth and Reconciliation Commission prepares to issue its final report on the history of Canada's residential schools.

"I think the goal of today is to really say to the survivors and to first nations communities across the country that we are listening and we have heard and we are awaiting that report on Tuesday," Irwin Elman, an advocate for Children and Youth of Ontario, told CTV News Channel.

"It's a moment of opportunity for the country as a whole to join with First Nations people to listen and make change."

At least 6,000 aboriginal children between the ages of 7 and 15 died in these schools over the last century, Justice Murray Sinclair, head of the commission, told CBC on Friday, describing the deaths as "cultural genocide".

It is difficult to give an exact number since the federal government stopped recording the deaths around 1920, Sinclair said.

The commission is expected to share the findings of their six-year study in a report on June 2.

An estimated 150,000 native children were forcibly taken from their families and enrolled in residential schools over much of the 20th century, where thousands of children were subjected to abuse, and died of starvation, sickness and experiments.

The last of the residential schools, which were opened more than 130 years ago to assimilate native children, was closed in 1996.

The Anglican Church of Canada apologized to residential school survivors and their families in 1993, and Prime Minister Stephen Harper issued a historic apology in 2008.
Last Update: Jun 01, 2015 2:07 am
RELATED TOPICS