US Senate to pass bill that curtails mass domestic spying 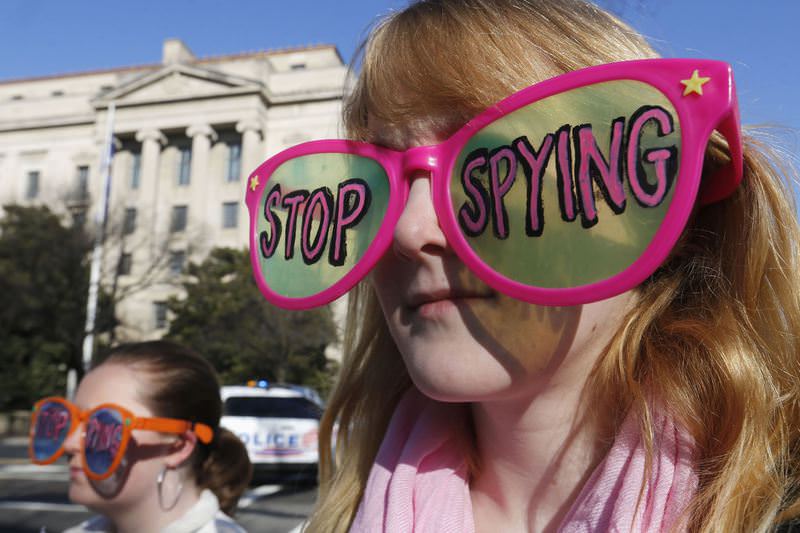 Cayman Macdonald, a member of the protest group Code Pink, protests outside the U.S. Department of Justice in Washington, in this January 17, 2014 file photo (Reuters Photo)
by Jun 02, 2015 12:00 am
The U.S. Senate voted to move ahead on Tuesday with a bill that would end the ability of spy agencies to collect Americans' telephone records in bulk and install a more targeted system, but a political fight loomed over potential changes to the bill.

The procedural vote of 83-14 limited debate on legislation known as the USA Freedom Act but arguments over how to balance Americans' concerns about privacy and fears of terrorism, which had already held up the bill, could stall it further.

Three domestic surveillance programs authorized under the USA Patriot Act, passed after the Sept. 11, 2001, attacks have been shut down since Sunday, after the Senate missed a deadline to extend legal authorities for certain data collection by the National Security Agency and Federal Bureau of Investigation.

Senate security hawks have proposed four amendments they say would plug important holes in the surveillance system outlined in the Freedom Act, which passed the House of Representatives by a 338-88 vote on May 13.

Among other things, their amendments would give the National Security Agency 12 months, instead of six, to wind down its existing collection of bulk telephone "metadata." They also want the Director of National Intelligence to certify that the new system works.

"Before scrapping an effective system that has helped protect us from attack in favor of an untried one, we should at least work toward securing some modest degree of assurance that the new system can, in fact, actually work," Senate Republican Majority Leader Mitch McConnell said.

Privacy advocates, however, who have opposed the program since it was exposed by former NSA contractor Edward Snowden two years ago, have balked. They say the changes would weaken privacy protections in the Freedom Act and hold up the bill.

"All of the amendments would delay passing an excellent piece of legislation, one that's been worked on by Republicans and Democrats for months and months, some would say years," said Democratic Senator Patrick Leahy, an author of the Freedom Act.

In a May 20 letter to McConnell and Senate Minority Leader Harry Reid, the NSA's director, Navy Admiral Michael Rogers, said the agency, with cooperation from telecommunications providers, could transition to the new system within the 180-day time frame set out in the bill passed by the House.

Another amendment would strip a provision allowing outside experts on privacy and civil liberties to argue in some cases before the secret Foreign Intelligence Surveillance Court.

The Senate could begin voting on amendments later on Tuesday.

If any amendments pass, the amended measure would have to be sent back to the House for its approval before it could be sent to the White House for President Barack Obama to sign into law.

White House spokesman Josh Earnest called on the Senate to pass the bill without adding amendments that could complicate passage. "It's time for the game-playing to come to an end," Earnest told reporters on Tuesday.

A senior U.S. intelligence official said the bulk telephone data collection system had been shut down since shortly before 8 p.m. EDT (midnight GMT) on Sunday.

The amendments could cause problems in the House.

Kevin McCarthy, the House' Republican Majority Leader, warned the Senate to approve the House-passed bill, as is.

"My advice is to take this bill and pass it," McCarthy said at a news conference, adding that Senate changes to the bill could present "challenges" in the House.

Senator Dan Coats, a Republican Senate Intelligence Committee member, said lawmakers faced "a devil's choice" as they considered whether to approve amendments, knowing that the House might not accept them, or back a flawed bill.

The Freedom Act could alleviate concerns of a federal appeals court, which ruled on May 7 that the programs as outlined in the Patriot Act were illegal.

Two senators who helped block proposed extensions of the existing surveillance programs offered their own slate of nine amendments to the Freedom Act on Tuesday.

Among other things, Republican Rand Paul and Democrat Ron Wyden want to make it easier to challenge the use of illegally obtain information in criminal proceedings, and raise the standard for collection of telephone records. None of those amendments was expected to come up for a vote in the Senate.