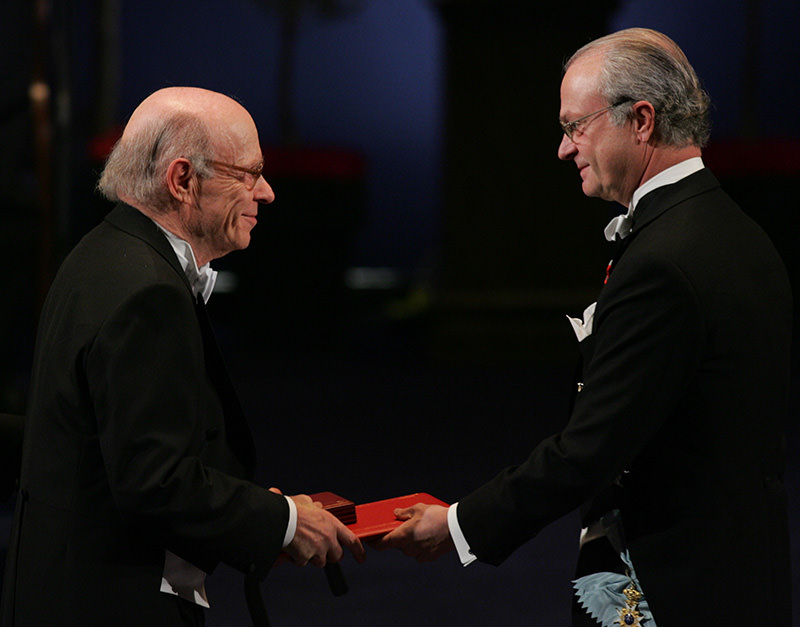 In this Friday, Dec. 10, 2004 file photo Irwin Rose of the U.S., left, receives the Nobel Prize in Chemistry from King Carl Gustaf of Sweden, right, during a ceremony at the Concert Hall in Stockholm, Sweden (AP Photo)
by Daily Sabah with AP Jun 03, 2015 12:00 am
American Nobel laureate Irwin Rose, a biochemist who shared the 2004 Nobel Prize in chemistry for his groundbreaking work in the development of treatments for cervical cancer and cystic fibrosis, has died on Tuesday, the University of California, Irvine said.

Rose died in his sleep early Tuesday in Deerfield, Massachusetts, said spokeswoman Janet Wilson of the University of California, Irvine, where Rose had been a researcher. He was 88.

Rose had a "formidable intellect and unwavering curiosity about fundamental biological and chemical processes that are the foundation for life," UCI Chancellor Howard Gillman said in a university statement.

Rose, along with Israelis Aaron Ciechanover and Avram Hershko, won the Nobel for discovering how plant and animal cells marked old and damaged proteins with a "kiss of death" molecule the polypeptide ubiquitin. The proteins are then chopped to pieces.

The process governs such key processes as cell division, DNA repair and quality control of newly produced proteins, as well as important parts of the body's immune defenses against disease, the Royal Swedish Academy of Sciences said in its Nobel citation.

Rose was born in Brooklyn, New York, on July 16, 1926, and spent much of his career as a researcher at the Fox Chase Cancer Center in Philadelphia. His Nobel-winning work was done there in the late 1970s and early 1980s.

He joined UC Irvine as a researcher after retiring to Laguna Beach in Southern California in 1997 and continued to work regularly in a campus lab and to publish research papers, the university said.

Rose's intelligence and knowledge were "in the stratosphere compared to the rest of us in the field," and he was always willing to provide hands-on help to students and researchers struggling with experiments, Ralph Bradshaw, a longtime friend of Rose's and a UC Irvine professor emeritus of physiology & biophysics, told the school.
Last Update: Jun 03, 2015 12:56 pm
RELATED TOPICS