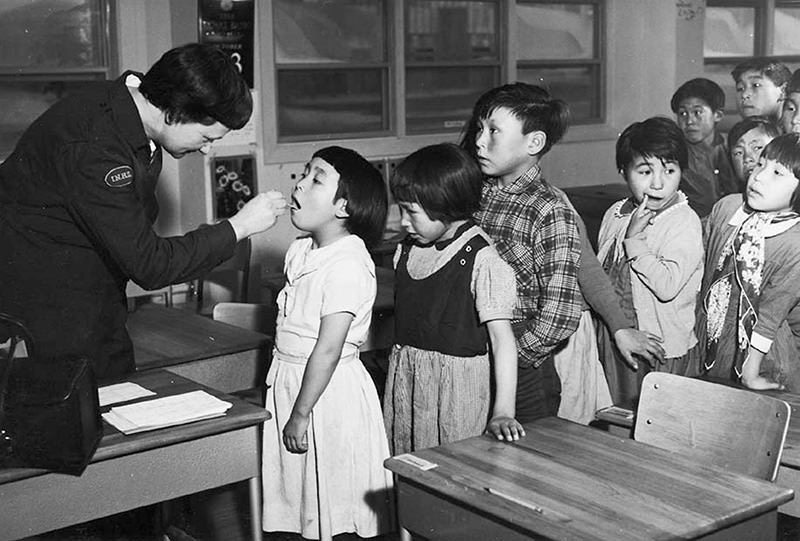 Nurse Desrochers checks a girl's throat while other children wait in line, at the Frobish Bay Federal Hostel in Nunavut, Canada in a 1959 archive photo (Reuters)
by Compiled from Wire Services Jun 03, 2015 12:00 am
A Canadian policy of forcibly separating aboriginal children from their families and sending them to residential schools amounted to "cultural genocide," a six-year investigation into the now-defunct system found on June 2, 2015.

The Truth and Reconciliation Commission's 360-page report contains 94 recommendations and says that Canada must move from "apology to action" to heal the rift created between aboriginal peoples and the rest of Canada.

Justice Murray Sinclair, who headed the commission, said that the number who died is just an estimate and the figure is quite probably much higher.

"We think that we have not uncovered anywhere near what the total would be because the record keeping around that question was very poor," he told the Canadian Broadcasting Corporation.

The commission was established to undertake a thorough investigation of the government-funded residential schools that were run by Christian churches. Aboriginal children were forcibly, if necessary, taken from their parents and placed in the schools, set up across Canada and hundreds of miles from their homes, to assimilate the children into mainstream, or white, society by eliminating parental and community involvement and teaching them nothing of their heritage as native Canadians.

About 150,000 children were sent to the schools over a period of more than 100 years, beginning in the 1880s and ending when the last facility closed in 1996. About 80,000 of the residential school children are still alive.

The commission traveled throughout Canada for six years and heard testimony from more than 7,000 former residential school students. Many told stories of emotional, physical and sexual abuse.

The practice was nothing less than an attempt by Canada to commit "cultural genocide" against aboriginal peoples, said Beverly McLachlin, the chief justice of the Supreme Court.

Some of the facts uncovered by the commission included that school students were subjected to punishment in homemade electric chairs, and were the victims of malnutrition experiments and the withholding of dental treatment.

But it is the deaths that proved most unnerving.

Prime Minister Stephen Harper issued an apology to survivors in 2008, as did the leaders of other political parties.

But the report said more apologies are necessary, including from the pope for those who suffered abuse in Catholic-run residential schools.

Among the recommendations, the report called for an acknowledgement that the poor state of aboriginal health overall is a direct result of prior Canadian government policies; that education of aboriginals in their language and culture be protected; a public inquiry into missing and murdered aboriginal women be established; and memorials to the victims be constructed in time for Canada's 150th anniversary in 2017.

The commission was not government-sponsored. It was created by the 2007 Indian Residential Schools Settlement Agreement-set up as part of the resolution of several large class-action lawsuits launched by former residential school students.

The government has not yet reacted to the report.