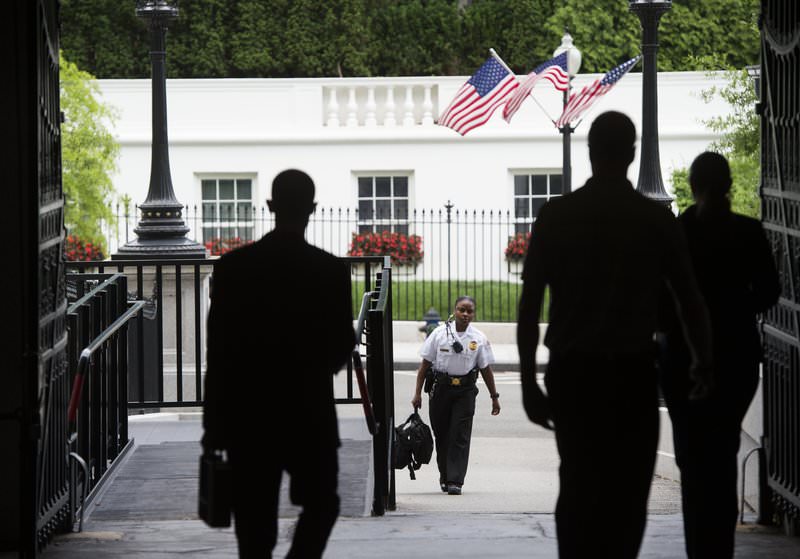 A member of the US Secret Service walks toward the Eisenhower Executive Office Building from the West Wing following an evacuation of the press from the Press Briefing Room at the White House in Washington, DC, June 9, 2015 (AFP Photo)
by Daily Sabah with Wires Jun 09, 2015 12:00 am
Two U.S. Senate Office buildings have been evacuated on Tuesday, June 9 in the middle of White House press secretary Josh Earnest's daily briefing after officials instructed everyone to clear the building.

The incident took place about an hour after receiving a phone call reporting a bomb threat. The U.S. Secret Service police evacuated several floors of the Dirksen Senate Office building and the White House briefing room as a precaution while the investigation continued.

Within hours of the bomb threat call, another call reporting a "suspicious" bag in the Russell Senate Office Building courtyard also caused panic. The Secret Service continued the evacuation of the two Senate Office buildings including the north lawn area. It is not clear if the two incidents are related.

Staff and journalists were moved to a neighboring building, CNN reported.

Secret Service dogs were also brought to help investigate a suspicious package but no threat was found and the all-clear was given.

About 30 minutes after the White House evacuation, reporters were allowed to return to the briefing room where spokesman Josh Earnest said metropolitan police initially received the threat and then forwarded the information to the Secret Service.

He said the agency continues to investigate the report and that President Barack Obama, whose office is in close proximity to the briefing room, was not evacuated. Other parts of the White House were not evacuated.

The partial evacuation interrupted a hearing into security lapses at the Transportation Security Administration.

A message posted to the Twitter account of the Senate sergeant-at-arms said the northwest door of the building was closed until further notice.

Tuesday's incidents follow a series of recent security lapses at the Capitol. Last month a man landed with a small gyrocopter on the south lawn of the Capitol - just weeks after the building was placed on lockdown when a man reportedly attempted suicide at the West Front of the building.
Last Update: Jun 09, 2015 11:59 pm
RELATED TOPICS