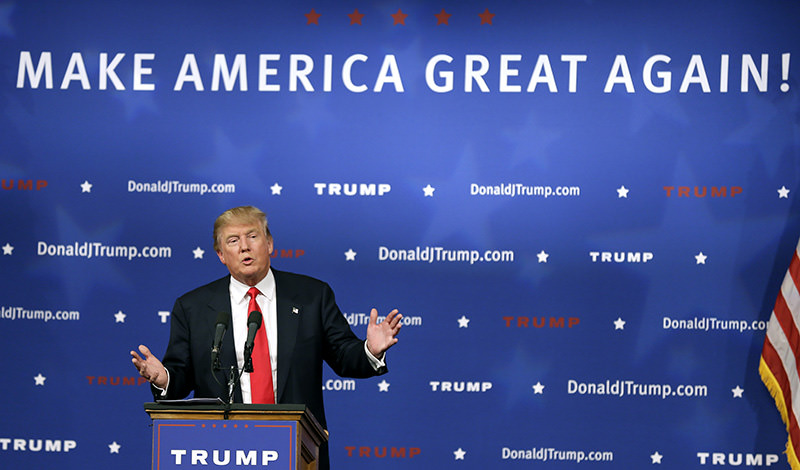 Republican presidential candidate Donald Trump speaks to supporters during a rally, Tuesday, June 16, 2015, in Des Moines, Iowa. (AP Photo)
by Daily Sabah Jun 16, 2015 12:00 am
Donald Trump, the flamboyant real estate magnate and television personality whose fortune is valued at $9 billion, announced on Tuesday that he is running for the U.S. presidency on the ticket of the Republican Party.

Trump, 69, announced his bid at the skyscraper in New York that bears his name.

Known in the U.S. as "The Donald", Trump is a celebrity, a businessman and a master of self-promotion. He has entered an increasingly crowded presidential race, punctuated by such big names such as former Florida Governor Jeb Bush, who is the son and brother of two former U.S. presidents, and former Secretary of State Hillary Rodham Clinton.

As Trump entered the presidential race, he is now required to reveal intimate details about his personal finances. The disclosure will include his net worth, sources of income, liabilities and assets. He will reveal the same information for his wife and dependent children.

Based on the guidelines recently announced by television networks, Trump is likely to play a prominent role in the upcoming nationally televised Republican debate in August.

Trump has teased presidential runs before, and has always backed out. But this time he has officially announced that he is running for president.
Last Update: Jun 17, 2015 10:06 am
RELATED TOPICS