Obama assures Hollande US no longer spying on France 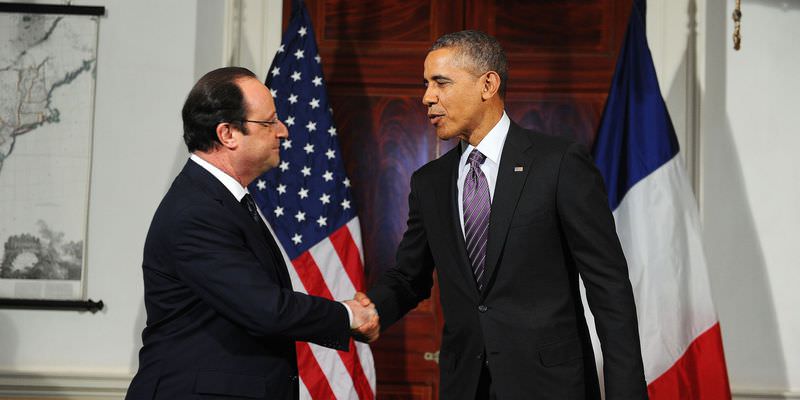 Obama "reiterated that we have abided by the commitment we made to our French counterparts in late 2013 that we are not targeting and will not target the communications of the French president," a White House statement said after the phone call between the two leaders.

Intelligence reports published late Tuesday by WikiLeaks along with its French media partners Liberation and Mediapart claimed the US spy agency targeted Hollande and his immediate predecessors, Nicolas Sarkozy and Jacques Chirac, from 2006 to 2012.

In a statement released by the Elysee Palace, Hollande said he discussed with Obama the "principles that should govern relations between allies on intelligence matters."

He called Obama after slamming the allegations as unacceptable.

"France, which has already strengthened security measures, will not tolerate anything that jeopardizes the safety and protection of its interests," Hollande had said.

US Ambassador Jane Hartley was called in to the French Foreign Ministry. After the meeting, Foreign Minister Laurent Fabius said he had called for swift answers about the extent of the alleged spying and whether it had ceased.

"These practices are not normal between democratic states that have been allied for a long time," Prime Minister Manuel Valls told lawmakers amid an uproar in Parliament and called the alleged spying "a serious breach of trust."

At the time that Obama and Hollande spoke, French lawmakers were preparing to make a final decision on a sweeping surveillance law that would vastly expand the French state's power to spy on its own citizens.

Despite the WikiLeaks revelations, the bill passed with overwhelming support and gives intelligence services authority to monitor telephone calls and internet traffic while at the same time establishing new control mechanisms.

Interior Minister Bernard Cazeneuve said the measures have nothing to do with the spying by the NSA.

The leaked WikiLeaks cables detail internal decisions by the three French presidents, describe secret meetings held by Hollande on the Greek crisis, concerns by Sarkozy about US spying on France and French efforts on the Middle East peace process.

The communications don't reveal any truly surprising information but reflect the extent to which the NSA apparently penetrated French communications at the highest level.

Documents leaked in 2013 by US whistleblower and former NSA contractor Edward Snowden first revealed the widespread collection of internet and telephone records as well as US electronic spying around the world, including on Washington's allies such as German Chancellor Angela Merkel and Brazilian President Dilma Rousseff.

In April, there were further revelations that the NSA used German intelligence service BND to spy on high-ranking officials in France's Foreign Ministry and presidential palace.

While reports on the WikiLeaks tranche indicated that the German intelligence service may have had a role in the new revelations, German lawmaker Patrick Sensburg - who is overseeing a committee investigating the allegations of cooperation with the NSA - said a preliminary examination reveals no evidence of German involvement.
Last Update: Jun 25, 2015 12:57 am
RELATED TOPICS