After Charleston shootings, poll signals race dilemma for Republicans: US 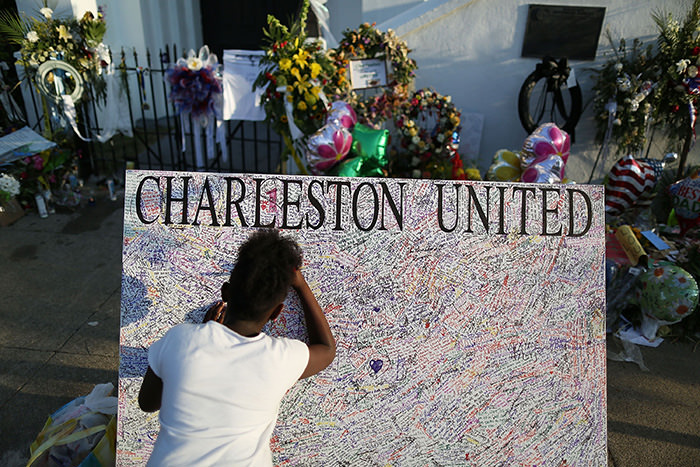 Jennice Barr, 10, leaves a message on a board set up in front of the Emanuel African Methodist Episcopal Church after a mass shooting at the church killed nine people, on June 22, 2015 (AFP Photo)
by reuters
Jun 25, 2015 12:00 am
Republican presidential contenders face a dilemma when talking about racial issues after last week's racially motivated murders at a South Carolina church, as a new poll shows many Republican primary voters are less likely to see the topic as important.

While more than three-quarters of Americans believe race relations must be addressed in the United States, a smaller majority of only about 65 percent of likely Republican primary voters agree, a new Reuters/Ipsos poll found.

One-third of likely Republican primary voters see race relations as unimportant to some degree, compared to only 9 percent of likely Democratic voters who feel that way.

"There is a tension Republicans are trying to navigate, and they are really stuck between a rock and a hard place," said Ipsos pollster Chris Jackson.

"You have the majority of the public on one side, but the people who are actually going to vote for them in the primaries are less interested in this particular issue and may have different takes or alternate priorities altogether," he said.

The poll, carried out after the murder by a white gunman of nine black members of a Bible study group at a Charleston church, also found Democrats were more trusted to deal with race relations by more than a 2-to-1 margin.

The findings illustrate the Republican Party's challenge in trying to expand its appeal among minorities - crucial if the party is to win the presidency - and could help explain the largely muted response to the Charleston shootings by the party's 2016 presidential contenders.

Around a dozen hopefuls, who must court the white, conservative voters who dominate the party's primaries, largely steered clear of calls to action or policy prescriptions after the shootings, focusing instead on messages of condolence.

Several Republican presidential contenders and other party leaders did join South Carolina state officials earlier this week in calling for removal of the Confederate battle flag from in front of the State House, seat of the legislature, labeling it an act of healing and unity.

"Republican leaders have stepped up and are working hard to address all voter concerns, including those involving race," he said.

After losing the 2012 presidential election, Republicans had vowed to expand their appeal beyond their shrinking base of white males and reach out to court new supporters among blacks, Hispanics, Asians and the young.

But blacks have for decades been the most loyal Democratic voting bloc, a trend only reinforced by the election of President Barack Obama, the first black in the White House.

When Obama won re-election in 2012, Mitt Romney received 6 percent of the black vote. No Republican presidential contender has won more than 12 percent of black votes since President Gerald Ford's 15 percent in 1976.

The poll found Democratic front-runner Hillary Clinton was considered the presidential contender who was best suited to handle the issue of race relations, with 17 percent of all adults and 32 percent of blacks viewing her that way.

Carson and Bush are among 13 candidates who have formally jumped into the race for the Republican presidential nomination in the November 2016 election.

Some respondents to the poll said the issue of race relations simply took a backseat to more heavily debated topics such as unemployment, crime, education and trade.

"I don't know if it's really an election issue, it's a people issue. Our political leaders can't change it," said Alex Jackson, a white Republican who is a student at West Georgia College in Carrolton, Georgia. She rated race relations as "somewhat unimportant."

Mary Wickham, a white Republican in Naperville, Illinois, who also said race relations were "somewhat unimportant", said she did not see it as an issue in her diverse community and she was much more interested in a candidate's views on immigration.

"It's just not a problem here," she said of racial issues. "We pray together, we stay together."