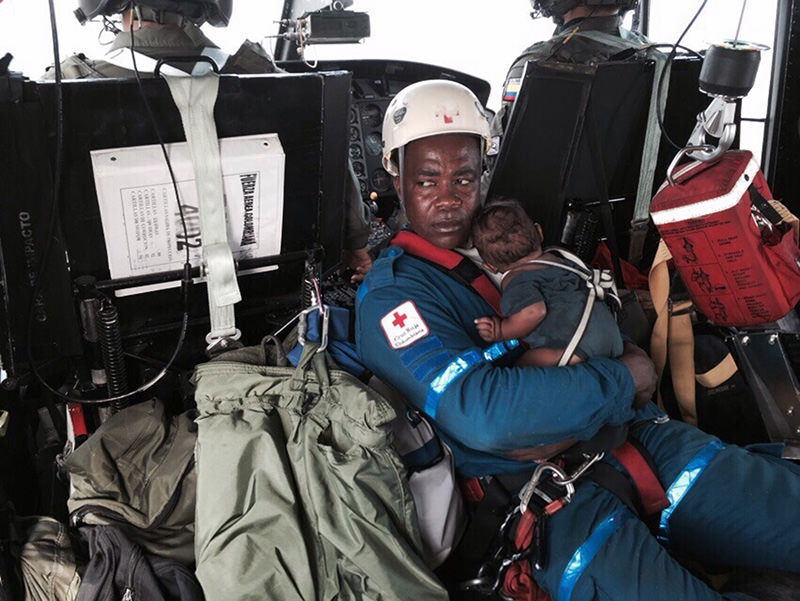 Handout photo released on June 24, 2015 of a Red Cross member holding baby Yudier Moreno as he and his mother are transported on a helicopter to a hospital in Colombia (AFP Photo)
by Jun 25, 2015 12:00 am
A mother and her infant son, who disappeared in a jungle plane crash in the dense jungles of Colombia several days ago, were found alive on Wednesday as authorities called the incident a "miracle."

Nelly Murillo, 18, and her son Yudier Moreno, not yet one year old, were discovered near the site where the Cessna 303 crashed on Saturday in thick brush.

"It's a miracle. It is a very wild area and it was a catastrophic accident," Colonel Hector Carrascal, commander of the Colombian Air Force in Antioquia department, told AFP.

"His mother's spirit must have given him strength to survive," he said of the baby.

Murillo and her son were taken by helicopter to a nearby hospital with minor injuries, said Carrascal, adding that he was stunned they were alive.

"The lady has wounds and minor burns and apparently the child is unharmed," the Colombian Air Force said in a statement.

The plane's pilot, Captain Carlos Mario Ceballos, died in the crash and rescuers found his body in the aircraft.

They discovered the doors of the plane ajar and suspected that survivors may have climbed out.

A 14-person search-and-rescue team scoured the dense forest for several days before finding the mother and child.

The rescue team was on the last day of its work when the mother and child appeared near the site of the crash, Carrascal said.

The plane offered air taxi services between remote areas in northwest Colombia. It was traveling between Nuqui and Quibdo when it was declared missing, authorities said.

Investigators are trying to find the cause of the crash.
Last Update: Jun 25, 2015 1:07 pm
RELATED TOPICS