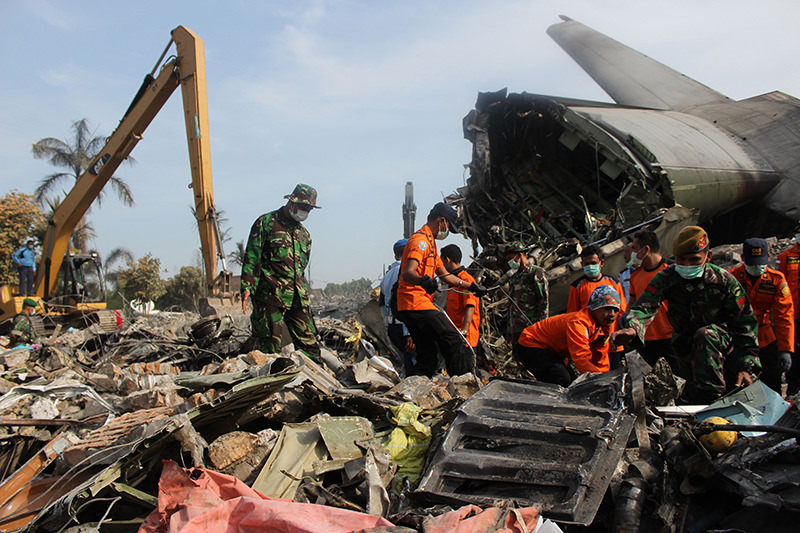 Soldiers search the tail wreckage at the crash site of an Indonesian Air Force C-130 Hercules aircraft a day after the accident, next to a destroyed commercial building in Medan (AFP Photo)
by Compiled from Wire Services Jul 01, 2015 12:00 am
The day after an Indonesian Air Force plane ploughed into a residential area shortly after takeoff, search and rescue teams have removed 135 bodies from the crash site.

The Head of North Sumatra's Disaster Victim Identification team, Setyo Pranoto, told Anadolu Agency on Wednesday that a team of 50 doctors was now working to identify the victims.

"Most of them are in an intact condition and suffered burns," he said.

It remains unclear exactly how many of the 135 were on the flight, although the Head of Air Force Staff, Air Marshal Agus Supriyatna, had said that the plane was carrying 113 people.

That number was updated to 144 Wednesday, when Indonesian air force spokesperson Dwi Badarmanto said that 122 passengers were on board, in addition to 12 crew.

"We had the list of the manifest and it was changing a lot. There were some children who were not named on the manifest, maybe five to eight," he told reporters.

The corpses -- many of which were found strewn around the wreckage, amid the remains of a massage parlor, houses and a hotel -- have been taken to the nearby Adam Malik Hospital in Medan, North Sumatra.

More victims are expected to be found amid the debris.

"There are already 135 bodies there," an Adam Malik hospital officer told Detik.com on Wednesday.

A total of 32 bodies have been identified based on information found on them.
Last Update: Jul 01, 2015 10:27 am
RELATED TOPICS