Brazil to lower age of criminal responsibility to 16 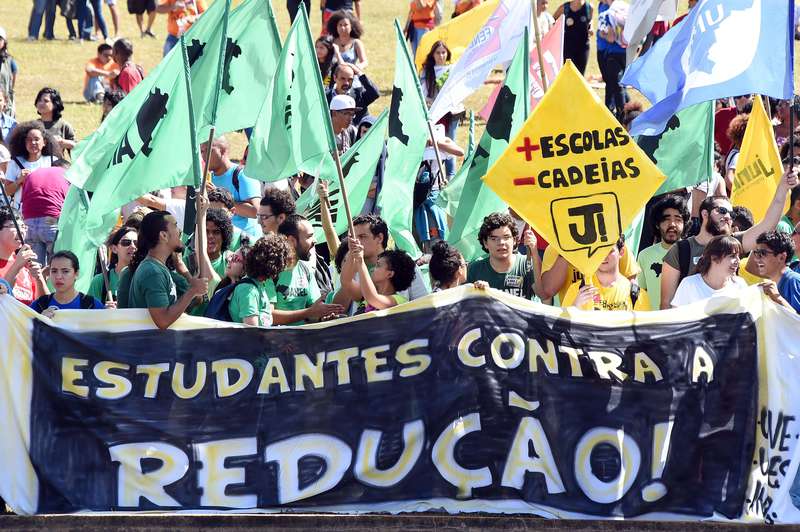 | AFP Photo
by Anadolu Agency Jul 02, 2015 12:00 am
Brazil's lower house of Congress on Thursday passed a controversial bill on reducing the age of penal majority from 18 to 16 as the country's decision drew heavy criticism from UNICEF and other human rights organizations.

The bill, which passed its first reading, would reduce the age of criminal responsibility for heinous crimes, murder and grievous bodily harm resulting in death.

A previous proposal that included drug trafficking, terrorism, torture, aggravated robbery and grievous bodily harm not resulting in death were all removed for the updated bill.

The amendment requires a second successful reading by deputies, and two votes in the Senate before it can become law.
"Society no longer accepts the impunity and no longer wishes to feel the fear, terror and apprehension that is experienced in daily life," Leonardo Picciani, leader of the Brazilian Democratic Movement Party which defended the bill, told Congress.

But many deputies continued to oppose the bill, including President Dilma Rousseff's ruling Workers' Party, fearful that it would expose young people to more serious criminals.

"We do not want young offenders on the streets, but we want decent places for them to be punished. It is not acceptable for young people to mix with highly-dangerous criminals," said Workers' Party deputy José Guimarães. "The future of these generations is at stake."

Discussions about reducing the age of criminal responsibility also sparked ferocious debates across Brazil in recent weeks, including angry protests outside Congress. The proposals have also been heavily criticized by human rights organizations.

The bill is "the biggest step backwards for children's and adolescents' rights in Brazilian history", UNICEF told Anadolu Agency.

"Brazil was a pioneer and world leader in child protection rights, but this terrible decision had tarnished that record," said Casimira Benge, UNICEF Brazil's child protection coordinator. "We will continue to fight this bill, highlighting the dangers it presents and that it won't reduce crime, as is often alleged."

Under current law, those younger than 18 cannot be held legally responsible for their actions, although children older than 12 can be judged in accordance with the country's Statute of Children and Adolescents, and held for up to three years in special facilities.

Some opponents of the bill have supported increasing this to eight years as an alternative.

Proponents of the bill say that offenders aged 16 or 17 would be housed in separate penitentiaries, with socio-educational programs, but UNICEF said Brazil's ability to handle its severely-overcrowded regular adult prison system "gave little cause for confidence."

A recent study by the G1 news portal found Brazil currently has a little less than 616,000 prisoners but with spaces for just 371,500.