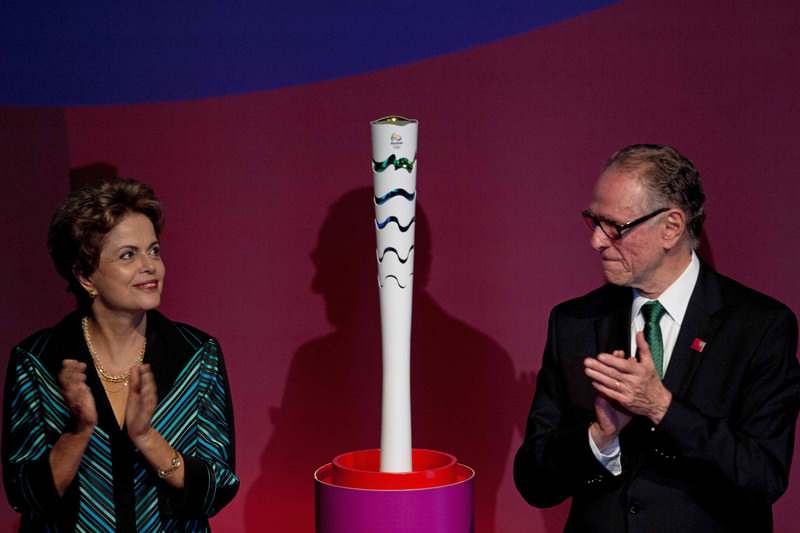 | AP Photo
by Jul 03, 2015 12:00 am
12,000 people will be chosen to carry the Olympic torch around Brazil starting in May 2016 for the Games in Rio de Janeiro, the organizing committee announced on Friday. The torch's design was also unveiled by Brazilian President Dilma Rousseff.

"There will be around 12,000 torch bearers that will carry the Olympic flame across some 300 cities and towns in the 26 Brazilian states, plus the Federal District, for 90 to 100 days," the organizing committee said in a statement.

"Each Torch - crafted from recycled aluminum and resin with a satin finish - weighs between 1kg and 1.5kg and stands 63.5cm high when contracted and 69cm when expanded."

The torch bearers will be chosen in the next two months by the organizing committee and sponsors Coca-Cola, Nissan and Bradesco, organizers added.

They will each get to carry the torch about 300 meters.

The torch's journey around Brazil will end on August 5 which marks the start of the games in Rio de Janeiro.

Authorities are working on security for the torch relay, one of the most inclusive parts of the Olympic celebration.

Some 19 of the world's 50 most dangerous cities are in Brazil, according to a report released this year by Mexican advocacy group Citizen Council for Public Security and Criminal Justice. The Olympic torch will visit all 19 of them.