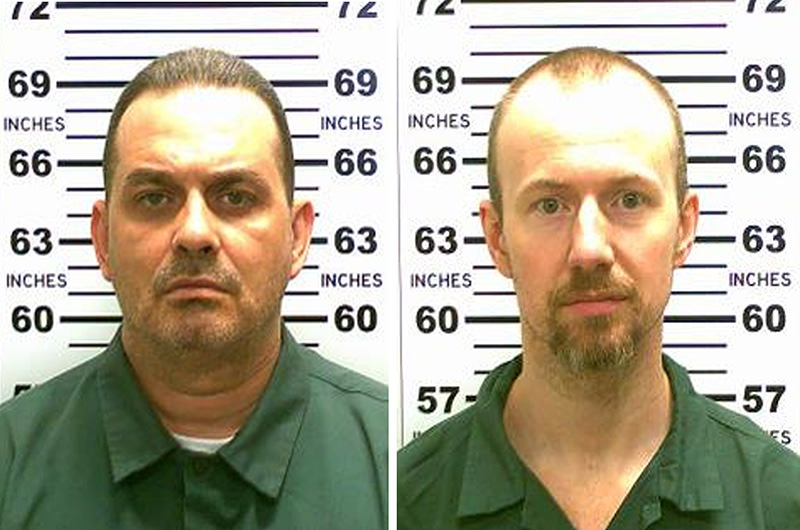 This combination of booking photos received on June 7, 2015, courtesy of the office of New York State Police, shows convicted murderers David Sweat(R) and Richard Matt. (AFP Photo)
by Jul 05, 2015 12:00 am
Captured prison escapee David Sweat was released on Sunday from a New York hospital where he had been treated for gunshot wounds and moved to a prison more than 250 miles (400 km) from the one he fled, authorities said.

Sweat, captured last Sunday following a three-week manhunt, will be locked up alone in a cell for 23 hours a day and placed on suicide watch at Five Points Correctional Facility in Romulus, in the state's Finger Lakes region, the Department of Corrections and Community Supervision said.

Sweat, 35, and accomplice Richard Matt escaped from maximum security Clinton Correctional Facility in Dannemora, New York on June 6. Matt, 49, was shot and killed by a federal agent on June 26 about 27 miles (43 km) away from the prison.

The pair, both convicted murderers, had lived in prison in so-called honor housing which offered limited privileges to prisoners considered to be well-behaved.

In their brazen break-out, Matt and Sweat cut holes in their cell walls, climbed down a catwalk, slipped through a steam pipe and emerged from a manhole outside prison walls, authorities said.

Sweat, who was shot twice in the torso by a state police trooper during his capture near the Canadian border, was released from Albany Medical Center at about 3 a.m., the DOCCS said. The agency did not disclose details of his transport to prison.

After a medical evaluation, Sweat will be held in Special Housing in a cell equipped with a bed, writing platform, toilet, sink and shower, prison authorities said. Opened in 2000, Five Points houses 1,294 inmates.

Honor housing at Clinton allowed Matt and Sweat to cook their own meals, wear some street clothing and have more freedom of movement, yard access and television and telephone time than the prison's general population.

Sweat will be charged with first-degree escape, authorities have said. He is already serving life without parole for the murder of a Broome County sheriff's deputy.

Two Clinton prison workers are charged with helping in the escape. Corrections officer Gene Palmer and prison tailor shop supervisor Joyce Mitchell are accused of smuggling hacksaw blades and a screwdriver bit to the pair.

New York Governor Andrew Cuomo has ordered an investigation of the prison, where strict new security procedures have been implemented. Its superintendent was replaced after he and 11 other employees were put on administrative leave.