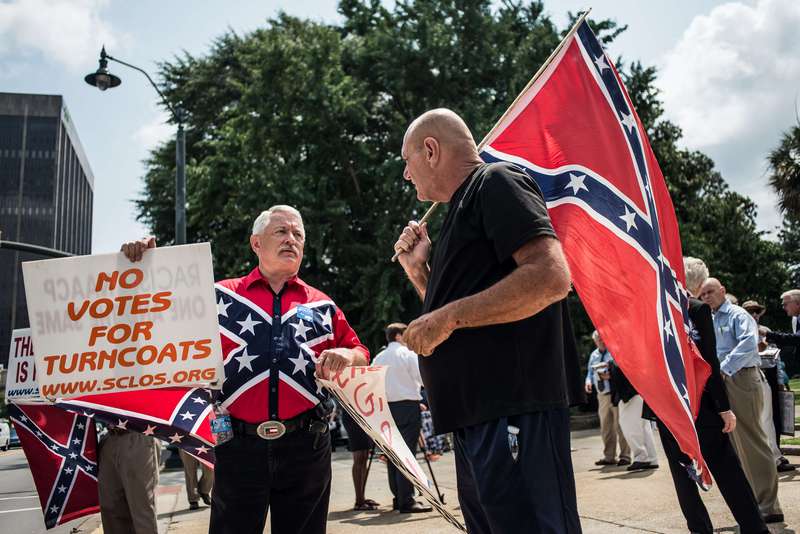 | AFP Photo
by Daily Sabah with AFP Jul 07, 2015 12:00 am
The South Carolina State senators voted on Monday to remove the Confederate flag from the Statehouse grounds after the killing of nine black people during a Bible study at a historic African-American church on June 17 sparked outrage across the country.

The proposal approved 37-3 by the Senate, is now set to go before the House of Representatives, amid growing public demands for the red, white and blue banner to no longer fly outside the legislature in the state capital Columbia.

"It's the right thing to do," said Democratic state senator Vincent Sheheen as he and his colleagues in the Republican-dominated legislature took up the hot-button issue.

Governor Nikki Haley, a Republican with Tea Party support, also spoke out in favor of taking down the flag in the wake of the Charleston shooting.

But by law, the final decision rests with both houses of the Republican-dominated South Carolina legislature, which could resolve the issue before going on its summer break this week.

Monday's vote comes less than a week after the 15th anniversary of South Carolina taking the flag off the Capitol dome, which was then moved in 1961 to fly beside a Confederate memorial honoring the confederate soldiers.

The June 17 mass murder of nine blacks -- including a state senator -- at the historic Emanuel African Methodist Episcopal church in Charleston rekindled lawmakers to take the flag down again.

Dylann Roof, 21, a suspected white supremacist charged with the killings, has been seen in online photographs flaunting the Confederate flag, which some embrace as a symbol of Southern heritage but others condemn as a banner of racial hatred.
Last Update: Jul 07, 2015 1:01 am
RELATED TOPICS