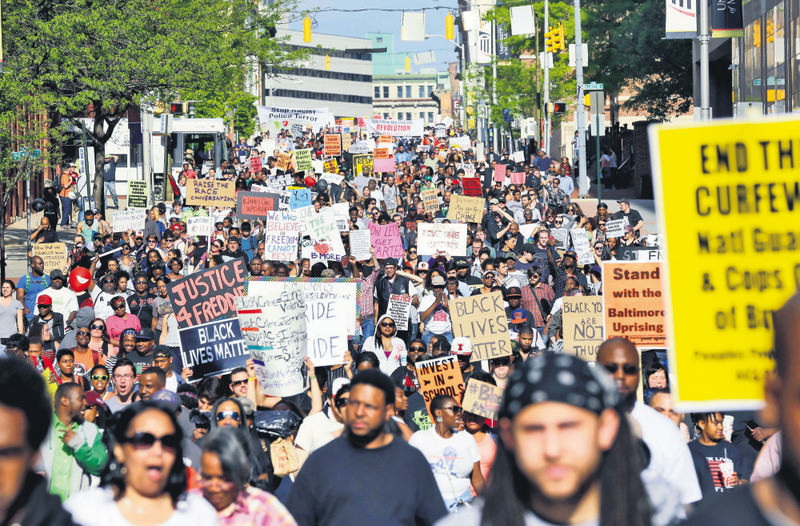 Baltimore Mayor Stephanie Rawlings-Blake fired Police Commissioner Anthony Batts on Wednesday, saying a spike in violence and homicides following the death of an unarmed black man in police custody required a change of leadership and that the people of Baltimore ‘deserve better'

At a news conference Wednesday afternoon, Baltimore Mayor Stephanie Rawlings-Blake announced that, two and a half months after riots broke out following the killing of an unarmed black man, 24 year-old Freddie Gray, in police custody, she fired Police Commissioner Anthony Batts. She said that Batts' presence was distracting ever since the recent increase of violence in the city following Gray's death and the subsequent riots.

Thanking Batts for his service and noting that he has "served this city with distinction," Mayor Rawlings-Blake nevertheless said, regarding the rising homicides, "too many continue to die." She added, "The focus has been too much on the leadership of the department and not enough on crime fighting. We need to get the crime surge under control." "We need a change," Rawlings-Blake explained. "This was not an easy decision but it is one that is in the best interest of Baltimore. The people of Baltimore deserve better and we're going to get better." Batts, who has been on Baltimore's police force since October 2012, is to be replaced with his deputy, Kevin Davis, for an interim period. Davis, also praising Bratts, spoke at the news conference on Wednesday, saying, "He's a friend. He's a mentor. There aren't many police chiefs and commissioners in this country who have done what he's done. My friendship with Commissioner Batts and everything I've learned from him will help me serve the city going forward."

Six police officers have been criminally charged with assault, false imprisonment, manslaughter and misconduct in office for Freddie Gray's death after suffering a critical spinal injury sustained while in police custody. Gray's death sparked riots in April, shaking the city with civil unrest. Since the riots, Baltimore's homicide rate has jolted while arrests have dropped. Most recently, on Tuesday night gunmen jumped out of two vans and fired at a group of people nearby an urban university campus. Three people were killed, and one person sustained injuries after being shot, but is currently in stable condition. On Wednesday, police said that the shooting was not random, but no arrests were made. The shooting was the second on the block in the same week, according to campus police. With these three deaths and a separate fatal shooting overnight, the total of homicides this year in Baltimore rises to 155, which shows a 48 percent increase compared with the same period last year. On Tuesday, the police department announced that a separate, outside organization will conduct an investigation into the violence following Gray's death. Additionally, the U.S. Justice Department is conducting a civil rights review of the Baltimore police force.

This will not be the first investigation into the violence following Gray's death. The city's police department released a report on Tuesday of its "after action review" of the police response and handling of the riots. The report criticized Batts' handling of the situation, saying officers "lacked basic riot equipment, training, and, as events unfolded, direction from leadership." Despite voicing criticisms of the report, accusing the union of using "baseless and false information" to reach its conclusions, Mayor Rawlings-Blake still finds holding leadership responsible for misconduct and instability in Baltimore a priority. Mayor Rawlings-Blake said Davis would "bring accountability to police, and hold officers who act out of line accountable for their actions." Batts' replacement comes after three decades of experience in law enforcement according to his biography on the Baltimore Police Department website, including serving as chief of police in Long Beach, California, and Oakland, California. Batts earned a doctorate in public administration from the University of La Verne, a master's in business management from the University of Redlands, and a bachelor's in law enforcement administration from California State University, Long Beach.
Last Update: Jul 09, 2015 8:34 pm
RELATED TOPICS