Confederate flag to come down from South Carolina state capitol 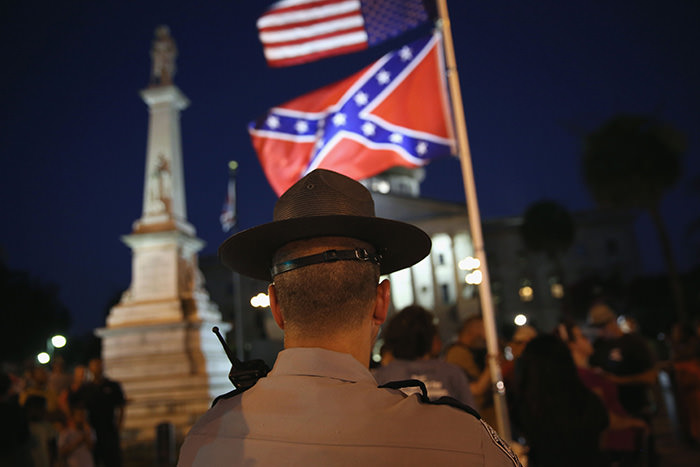 The rebel flag, raised on state grounds more than 50 years ago at the height of the U.S. civil rights movement, is due to be lowered quietly at 10 a.m..

It will be moved to the "relic room" of a military museum in the state capital of Columbia to reside with other artifacts carried by southern Confederate soldiers 150 years ago.

"It's a great day in South Carolina," the state's Republican Governor Nikki Haley said on Friday in an interview with NBC's "Today" show.

As she signed the legislation to remove the Confederate flag on Thursday, Haley said: "We will bring it down with dignity."

Haley called for the flag's relocation shortly after the killing of nine black worshippers during a Bible study session on June 17 at a historic black church in Charleston.

The white man charged in the killings, 21-year-old Dylann Roof, appeared in photographs posing with a Confederate flag that surfaced on a website bearing a racist manifesto. The image spurred politicians and leading national retailers to pull the flag from display.

In South Carolina, the first state to secede during the 1861-1865 U.S. Civil War, this week's debate in the state legislature brought an emotional closure to a symbol long divisive in the state.

The Confederate flag waved atop the state capitol from 1961 to 2000, when it was moved to a Confederate war memorial near the State House entrance.

"In South Carolina we honor tradition, we honor history, we honor heritage. But there's a place for that flag and that flag needs to be in a museum, where we will continue to make sure that people can honor it appropriately," Haley said on "Today."

Critics now hope to remove it as quietly as possible.

"What we don't want is a lot of controversy around it," said state Representative Jerry Govan, a black Democrat, who recalled during the legislative debate how he had nails thrown in his face when he was a child by white youths in a pickup truck flying the Confederate flag.

"This takes away a wedge issue that's been used for many years," he said.

The Confederate flag's days as a public symbol – a flag or a state emblem – are coming to an end with the passage of Thursday's law, said Carole Emberton, Civil War expert at the University at Buffalo.

"Will people still wear the symbol on their T-shirts or fly it from their homes? Sure they will. But as far as this flag symbolizing a state or local government, that day is over."