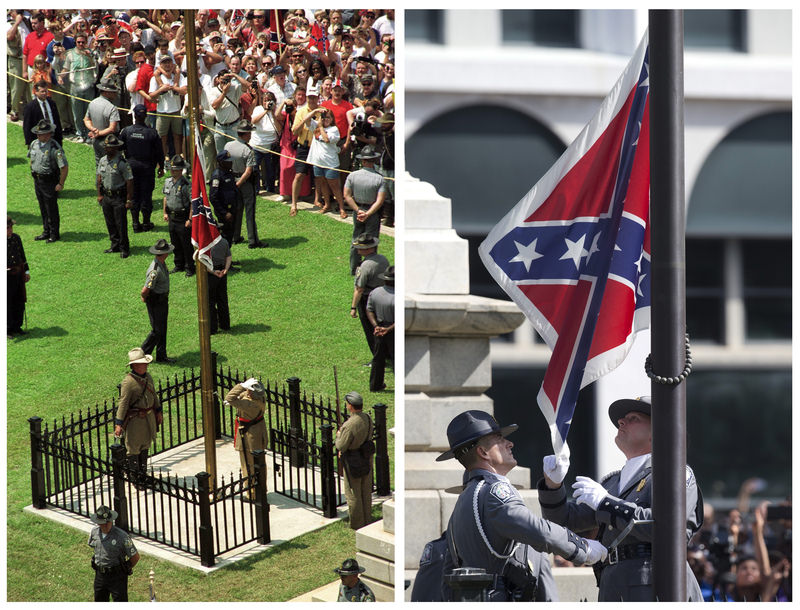 | AP Photo
by Associated Press Jul 10, 2015 12:00 am
The rebel Confederate flag and flag pole has been officially removed from South Carolina Statehouse grounds where it had flown for 54 years on Friday.

The massacre of nine black churchgoers reignited calls to remove Confederate flags and symbols across the South and around the U.S.

The rebel banner was taken down Friday morning by a Highway Patrol honor guard in a ceremony attended by thousands who cheered at the removal, many yelling "USA, USA" and "Hey, hey, hey, goodbye!"

A special armored van was taking the flag to a state museum, where it eventually will be housed in a multimillion-dollar shrine lawmakers promised to build as part of a compromise to get the bill ordering the flag's removal through the state Legislature.

As South Carolina Governor Nikki looked on, two troopers rolled the flag and tied it up with a string. They handed it to a black trooper who brought it to the Statehouse steps. When the trooper handed it to a state archivist, the governor clapped.

Patsy Eaddy, a black woman, said there was a "sense of embarrassment" of seeing the flag still flying after all these years. She attended the ceremony to see the important milestone in the civil rights movement.

People who supported removing the flag chanted "take it down" before the ceremony and vastly outnumbered those who were upset about the move.

Still, some were not celebrating. Clad in a black dress similar to those worn in the 1800s, Cindy Lampley clutched a poster showing photos of ancestors who fought for the Confederacy. Lampley said she is a historical reenactor who fears removing symbols like the flag dishonors her relatives who fought for the Southern cause.

"I think it's important that we remember them," Lampley said. "It's a sad day for me, that my ancestors will no longer see their flag flying next to their memorial."

President Barack Obama tweeted minutes after the flag was down, saying it was "a sign of good will and healing and a meaningful step towards a better future." Obama delivered a eulogy at the funeral for state Senator Clementa Pinckney, who was also pastor of the church where the killings took place.

The flag came down 23 days after the massacre of state Senator Clementa Pinckney and eight others inside Charleston's Emanuel African Methodist Episcopal Church. Haley signed the bill with 13 pens. Nine of them went to the families of the victims.

Authorities say they believe the killings were racially motivated. By posing with the Confederate flag before the shootings, suspect Dylann Storm Roof, who has not yet entered a plea to nine counts of murder, convinced some that the flag's reputation for white supremacy and racial oppression had trumped its symbolism of Southern heritage and ancestral pride.


"People say he was wrapped in hate, that he was a hateful person," said Democratic Representative Justin Bamberg. "Well, his hate was wrapped in the cloak of that Confederate flag. That is why that flag is coming down."

The FBI said Friday that Roof should not been allowed to purchase the weapon used in the attack. FBI Director James Comey outlined a series of missed opportunities and incomplete paperwork that allowed the transaction to take place.

The problem stemmed from an arrest of Dylann Roof in South Carolina weeks before the shooting in which police say he admitted to possessing illegal drugs.

South Carolina's leaders first flew the rebel battle flag over the Statehouse dome in 1961 to mark the 100th anniversary of the Civil War, when the pro-slavery South seceded and fought the northern Union. It remained there to represent official opposition to the civil rights movement.

Decades later, mass protests against the flag by those who said it was a symbol of racism and white supremacy led to a compromise in 2000 with lawmakers who insisted that it symbolized Southern heritage and states' rights. The two sides came to an agreement to move the flag from the dome to a 30-foot (9-meter) pole next to a Confederate monument in front of the Statehouse.

Thousands of people showed up for that transfer. Flag supporters shouted, "Off the dome and in your face!" at protesters who wanted the flag gone, a line of police in special gear separating the two sides. A pair of Citadel cadets, one white and one black, lowered the flag from the dome as a dozen Confederate re-enactors marched to the brand new flagpole and raised the rebel banner.

Supporters of the flag were disappointed, but resigned.


"It's just like the conclusion of the war itself," said Rep. Mike Pitts, who submitted several amendments to fly a different flag on the pole that all failed. "The issue was settled, and the nation came back together to move on."

States across the U.S are moving on without their Confederate symbols. The rebel flag is gone from the Alabama Capitol, and the U.S. House of Representatives voted that it can no longer fly at historic federal cemeteries in the Deep South. A city council committee in Memphis wants to move a statue and the remains of Civil War hero and slave trader Nathan Bedford Forrest out of a prominent park, and officials in Alaska want a new moniker for a U.S. Census district named for a Confederate general.

Haley supported the flag before the shootings, but the Republican governor had a change of heart in the days after the killings, urging legislators to pass a bill she could sign bringing the flag down before the end of the summer.