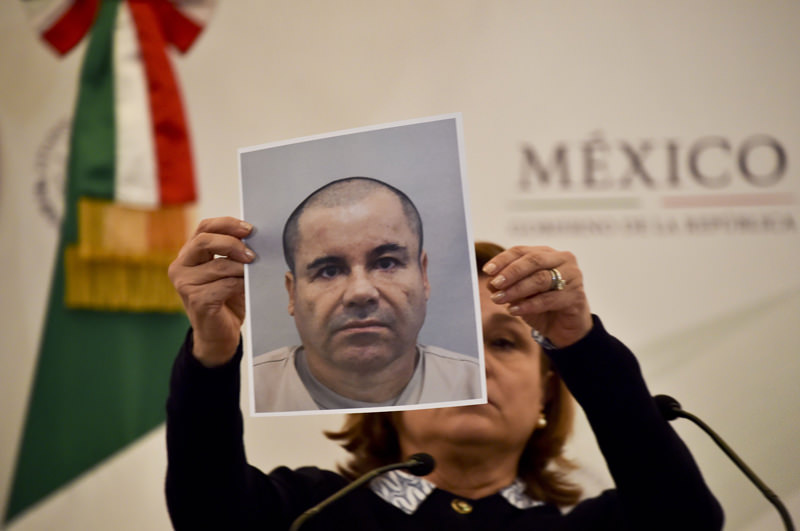 
Mexico's most prized prisoner paced his cell, first to the latrine, then the shower, then the bed. At every turn around the tiny room, drug lord Joaquin "El Chapo" Guzman checked the shower floor hidden by a half wall, because even jailed criminals get their privacy.

In his final sweep, Guzman sat on his bed and took off his shoes. Then he walked back to the shower, stooped behind the wall and disappeared. It was the beginning of an escape odyssey straight out of the pages of fiction, and the media were given a peek on Tuesday of the deep and sophisticated tunnel that led the leader of the Sinaloa cartel, whose illicit drug trafficking reach includes Europe and Asia, swiftly to freedom late Saturday night.

Government video of Guzman's final moments in his cell and a reporter's climb into the tunnel put real dimensions to a high-tech engineering feat three stories underground, where planners and builders managed to burrow through dirt and rock right to the one spot in Guzman's cell that surveillance cameras couldn't see.

Mexico's security commissioner Monte Alejandro Rubido said Tuesday that up to the moment Guzman disappeared, his pacing was considered normal for someone who lives in about 5 square meters (60 square feet) with only an hour a day outside for exercise. But there was nothing usual after he lifted a slab of concrete shower floor and descended into a warm and humid man-made underworld, where a motorcycle rigged to two carts on rails waited to whisk him away.

Guzman either rode on the bike or in one of the carts for a mile (1.5 kilometers) in the dirt tunnel built just high enough for a man called "Shorty" to stand without hitting his head. When he reached the other end, he climbed a wooden ladder through a large, wood-framed shaft with a winch overhead that had been used to drop construction supplies into the tunnel. After pulling himself up 17 rungs, he reached a small basement, where a blue power generator the size of a compact car provided the electricity to illuminate and pump oxygen into the underground escape route.

From there, Guzman walked to a shorter ladder and climbed one, two, three steps as the air thinned and the temperature dropped 10 degrees. As Guzman's head poked above the dirt floor, he climbed three more rungs to stand inside the unfinished bodega built to hide the elaborate scheme. 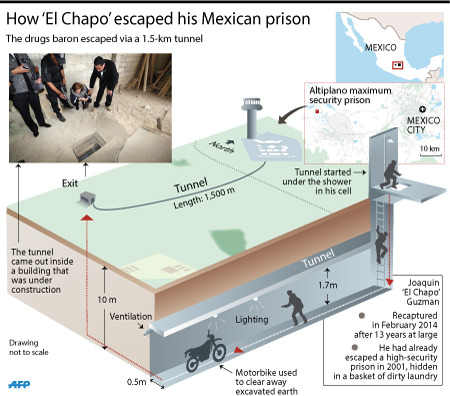 Digging crews had discarded 4-by 4-inch wooden beams, 8-foot-tall coils of steel mesh, gallons of hydraulic fluid, 10-foot lengths of PVC pipe and an electric disc saw. A battered wheel barrow full of fine gray soil sat just above the opening in the floor. A couple of improvised wooden tables and a wooden bench rounded out the bodega's furniture, along with shelves of assorted drill bits, a circular wood saw blade, a jar of liquid cement for pipe joining and a bottle of motor oil.

Seven more strides and the man who Mexico's government said could not possibly repeat his 2001 prison escape stepped through a sliding steel door into the chilly night on a high plain west of the capital.

The ingenuity and audacity of the caper was breathtaking.

It was no slapdash project. It appeared no expense was spared, though working quickly was the priority.

A tunnel of such sophistication would normally take 18 months to two years to complete, said Jim Dinkins, former head of Immigration and Customs Enforcement's Homeland Security Investigations. But Guzman was behind bars barely 16 months.

"When it's for the boss, you probably put that on high speed," Dinkins said.