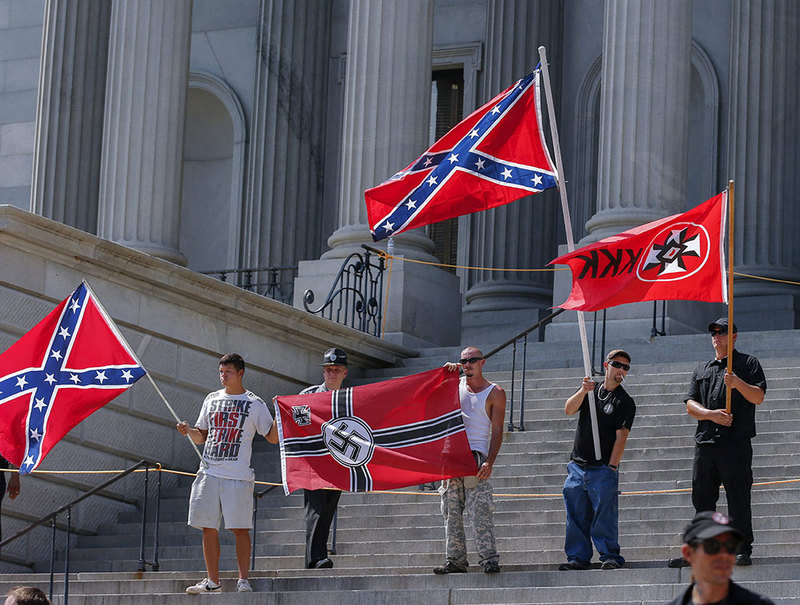 by Daily Sabah with Wires Jul 19, 2015 12:00 am
Hundreds of people taunted each other on the grounds of the South Carolina Statehouse during separate rallies staged by two groups from outside the state. Black Educators for Justice, based in Jacksonville, Florida, held its rally on Saturday on the north side of the Statehouse where the Confederate flag was removed earlier this month. Later, the North Carolina-based Loyal White Knights of the Ku Klux Klan (KKK) held a rally on the opposite side of the building to protest the flag's removal.

The South Carolina Department of Public Safety estimated the crowd at approximately 2,000. Spokeswoman Sherri Iacobelli said five people were arrested and 23 people needed medical attention. A statement from the Richland County Emergency Service said many of the 23 were treated for heat, but no specific number was given.

The KKK members waved the Confederate battle flag as they marched at the steps of the state legislature building, The State newspaper reported. Some from the white supremacist group marched up the Capital steps and waved a flag with a swastika. KKK members chanted and shouted at the crowd of onlookers, but made no speeches, the paper said.

As the KKK group headed for a police-guarded parking garage after their rally, counter-protesters followed and several fights broke out, according to The State and another newspaper, The Post and Courier. Two men who involved in a scuffle were led away by police. During the rallies, Leroy Smith, director of the South Carolina Department of Public Safety and who is black, was seen helping a white man wearing a T-shirt bearing a swastika get out of the heat.

Earlier, about 100 people from Black Educators for Justice gathered at the legislative building. People waving Confederate flags wandered into the black rally at one point. Verbal confrontations ensued, but police intervened quickly and separated the two groups, the Post and Courier reported.

The Confederate flag was removed from outside the state house on July 10 amid national outrage over the murder of nine black churchgoers by an alleged white supremacist in Charleston in June. The flag is regarded by many as a bitter symbol of racism and slavery that has no place in modern America. Some in the southern U.S. defend it as a symbol of their heritage. President Barack Obama tweeted minutes after the flag was down, saying it was "a sign of good will and healing and a meaningful step towards a better future."

The shooter in the Charleston massacre, Dylann Roof, 21, has been seen in online photographs brandishing firearms and the Confederate flag. The flag is embraced as a symbol of Southern heritage by some, but others condemn it as a banner of racial hatred. Roof has been indicted on nine counts of murder and is due to stand trial next year. Governor Nikki Haley earlier in the week urged residents to avoid the KKK rally, adding that doing so would honor the nine people shot and killed at a predominantly black church in Charleston last month.