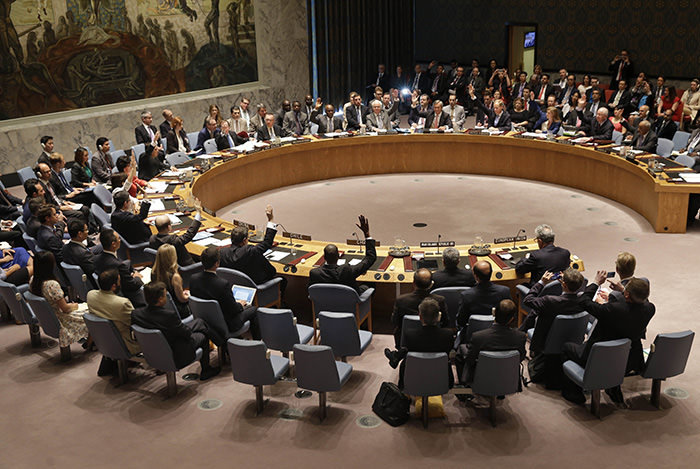 Members of the Security Council vote at United Nations headquarters, Monday, July 20, 2015 (AP Photo)
by Anadolu Agency Jul 20, 2015 12:00 am
The United Nations Security Council has adopted a resolution on Monday endorsing a deal that placed long-term curbs on Iran's nuclear program and beginning a process to remove U.N. sanctions against the country.

The unanimously adopted resolution will terminate all previous U.N. resolutions, imposing stringent sanctions which the country's leaders say have hurt its economy, once the International Atomic Energy Agency verifies that Tehran has implemented a series of nuclear-related measures.

However, it contains a "snap back" mechanism that will reverse the lifting of sanctions if Tehran breaches the deal it signed last week with the P5+1 group of countries - China, France, Russia, the U.K., the U.S. and Germany.

The resolution also keeps in place an embargo on the import and export of conventional arms for five years and a ban on supply of ballistic missile technology for eight years.

Iran and the P5+1 signed a final agreement in Vienna on Tuesday, bringing to a close nearly two years of contentious talks that focused on providing Tehran with sanctions relief in return for unprecedented curbs and inspections on its nuclear program.

The resolution's adoption in the Security Council was considered almost certain, as the council's five veto-wielding members were involved in the negotiations that led to the deal.

The agreement is expected to face its biggest challenge at the U.S. Congress, for which a 60-day period started last week to review it before voting on whether or not to endorse it.

There is strong Republican opposition to the deal in both the House of Representatives and the Senate, but President Barack Obama has said he will exercise his veto if Congress rejects the proposal.