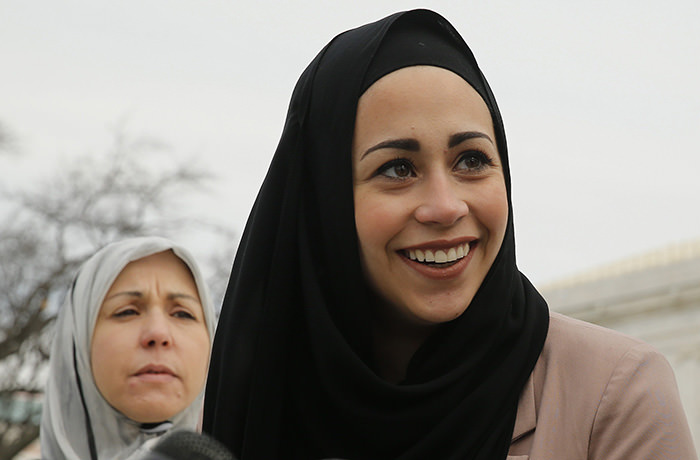 Muslim woman Samantha Elauf (R), who was denied a sales job at an Abercrombie Kids store in Tulsa in 2008
by Anadolu Agency Jul 22, 2015 12:00 am
A United States fashion retailer has agreed to pay more than $25,000 to a Muslim woman who was denied a job because she wore a headscarf during a job interview, a federal agency announced Tuesday.

Last month, the Supreme Court ruled 8-1 that Abercrombie & Fitch failed to accommodate Samantha Elauf's religious needs when they declined to hire her in 2008 for a position at an Abercrombie Kids store in Tulsa, Oklahoma.

The U.S. Equal Employment Opportunity Commission said a federal appeals court dismissed on Monday the company's appeal to the ruling.

Discriminating against an applicant based on religion is illegal under federal law, unless the employer can prove that accommodating the applicant would impose an undue hardship.

While Elauf earned high marks during the hiring process, her score was downgraded because she wore a headscarf during the interview.

The company had argued that it couldn't have known that it needed to make an exemption to its employee dress code because Elauf didn't identify herself as a Muslim.

However, the court ruling in June found that the retailers "knew or at least suspected that the scarf was worn for religious reasons".
Last Update: Jul 22, 2015 11:41 am
RELATED TOPICS