Human rights in Canada are under assault under PM Stephen Harper: right groups 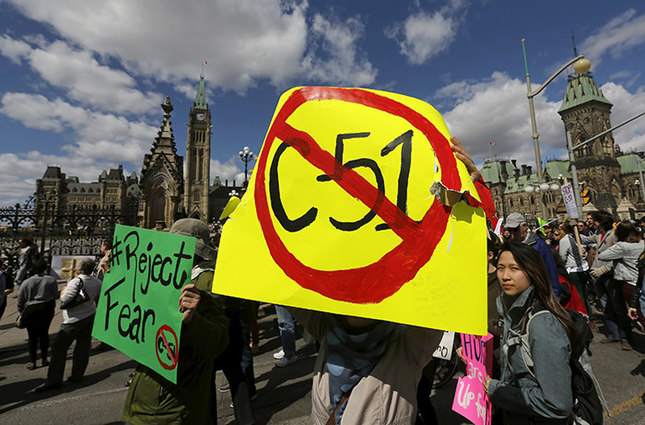 People take part in a demonstration against Bill C-51, the Canadian government's proposed anti-terror legislation, in Ottawa April 18, 2015 (Reuters Photo)
by Anadolu Agency Jul 24, 2015 12:00 am
The United Nations first report card on Canada in a decade, released Thursday, has accused the government of inaction on missing and murdered aboriginal women and taken issue with the new Bill C-51 anti-terrorism law.

Those are just two of the matters targeted by the United Nations human rights committee report. Others include intimidation of charities, abuses by Canadian companies operating in foreign countries, general violence against women, and excessive use of police force.

"Human rights in Canada are under assault, and the UN human rights committee noted that today," said Harriett MacLachlan, president of the Ottawa-based charitable group, Canada Without Poverty.

The UN report is the first detailed review of Canada's human rights record under the leadership of Prime Minister Stephen Harper and his Conservative government.

"This should be seen as a wake-up call by governments and courts in Canada that increasingly serious violations of civil and political rights in Canada can no longer be tolerated," MacLachlan told the online newspaper, Huffington Post Canada.

The UN report has joined critics of the Harper government in calling for a national inquiry into missing and murdered aboriginal women.

The Royal Canadian Mounted Police has reported that 1,181 aboriginal women have been murdered or disappeared between 1980 and 2012. "Indigenous women and girls are disproportionately affected by life-threatening forms of violence, homicides and disappearances," the UN said, as reported by the Canadian Broadcasting Corporation.

Overall violence against women was also targeted by the report, with the UN decrying the "lack of statistical data on domestic violence." The report called for better legal protections for women and more shelters for victims.

On Bill C-51, the UN said the anti-terror law allows mass surveillance, too much information sharing and called for better legal safeguards to protect citizen's rights.

It also mentioned charities, which are increasingly becoming targets of the Canada Revenue Agency and their charitable status investigated if the government deems the charity too political.

The Canada Without Poverty group has been subject to an ongoing audit of its activities for three years.

The UN report said such audits have created a "level of apprehension within a broad sector of civil society."

McLachlan said the report proves the Canadian government is guilty of "mistreatment" of charities.

"These audits have resulted in mounting fear of losing charitable status and therefore necessary funding sources across the entire charitable sector," she said.

Regarding the conduct of Canadian businesses in foreign countries, the report said "human rights abuses by Canadian companies operating abroad, particularly in mining corporations" should be looked into and a system set up for legal action by victims.

The UN report also took the government to task for allowing excessive police force during protests such as the ones at the G20 conference in 2010.

The report wants a response from Canada in five years as to what improvements have been made based on the UN criticisms and recommendations.
Last Update: Jul 24, 2015 11:54 am
RELATED TOPICS