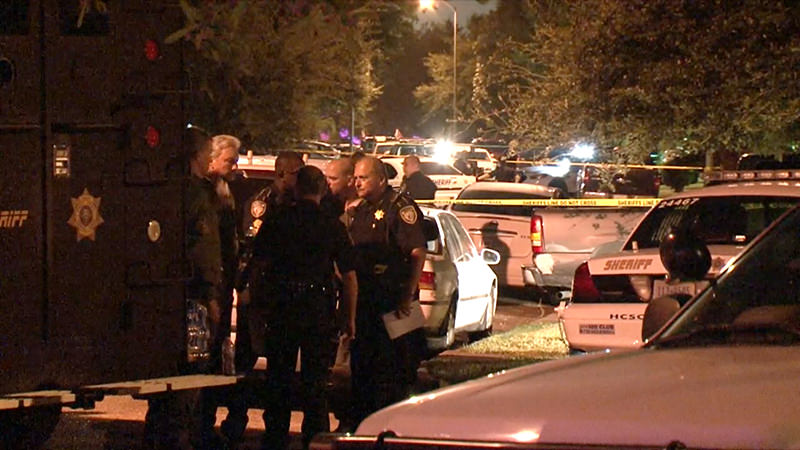 In this image made from a video, authorities investigate after reports of an active shooter in a home Sunday, Aug. 9, 2015, in Houston (AP Photo)
by Associated Press Aug 09, 2015 12:00 am
Eight people including five children and three adults were found dead inside a Texas home following the arrest of a man who exchanged gunfire with police, authorities in the U.S. state said Sunday.

Deputies were called to a home in the Houston area late Saturday to perform a welfare check, Harris County Sheriff spokesman Thomas Gilliland told KHOU-TV. Gilliland said deputies subsequently received information indicating that a man inside the home was wanted on a warrant for aggravated assault on a family member.

While waiting for a High Risk Operations Unit to arrive at the scene, deputies spotted the body of a juvenile through a window, Gilliland said. Four deputies then forced their way into the home, prompting the 49-year-old male suspect inside to begin shooting. Deputies pulled back and waited for the operations unit to arrive.

The man surrendered about an hour later.

The relationship between the suspect and the unidentified victims wasn't immediately known. No further details were released.
Last Update: Aug 09, 2015 2:56 pm
RELATED TOPICS