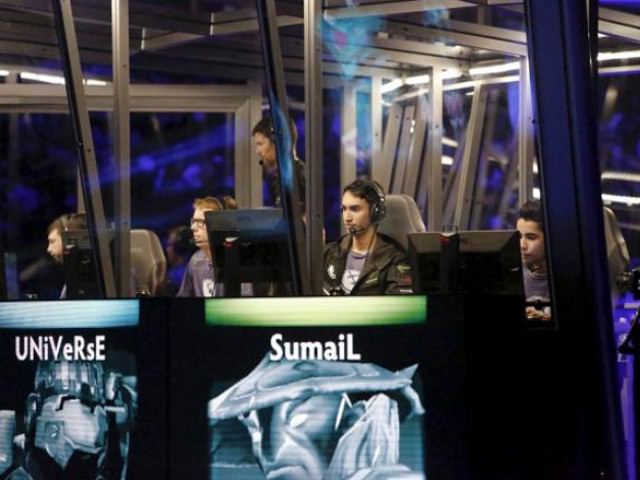 Sumail Hassan, from Karachi made history once again on Saturday when he helped his team, Evil Geniuses, win the Dota 2 International 2015 tournament in Seattle (Reuters photo)
by Aug 10, 2015 12:00 am
Sumail, 16, who moved from Pakistan to Illinois chasing his dreams of being a professional gamer and is most known for playing a powerful electricity-based champion for the team, said after winning the tournament, "It just meant everything to me."

By the end of Saturday's finals in Seattle, five players, including the 16-year-old, became more than a million dollars richer.

On Saturday, fans, handfuls of whom roamed the arena dressed as their favorite in-game heroes, roared as the team "Evil Geniuses" secured the championship, wiping out their enemies with an earth-shaking smash and a devastating blast of frost.

Teams of video gamers playing characters ranging from wizards to monsters exchanged virtual punches, fireballs and lightning strikes over the past six days, battling at the main event of the Dota 2 International 2015 tournament in Seattle.

Now in its fifth year and playing to a sold-out crowd in the 17,000-seat Key Arena, the International has grown every year in size, popularity and possible winnings for players. The tournament launched in 2011 with a then-groundbreaking grand prize of $1 million and now offers an $18 million prize pool.

Video games have long been a moneymaker for the tech sector, forecast to generate some $111 billion in revenue this year by consultants Gartner Inc. But over the past several years, playing them has turned into a full-time job for a select few top-tier players, as interest and prize pools have ballooned.

According to Valve, the publisher of Dota 2, about 11.5 million users log on monthly to play the game, in which two teams try to destroy each other's bases in an online arena.

Players and teams came to the United States from China, South Korea, Ukraine, Russia and elsewhere to compete for a share of the prize pool – with roughly $6.6 million going to the winning five-player squad.

Though while the tournament was international in scope, the home team Evil Geniuses drew the most support, with fans chanting "U-S-A" and "E-G" with each spectacular play.

Tickets for this year's event sold out and hundreds have registered to attend so-called "Pubstomp" viewing parties at bars and internet cafes in cities from Los Angeles to Sandy Springs, Georgia.

Hundreds of thousands of fans have tuned in daily this week to watch streams of the event on sites such as Twitch. TV, while thousands more have packed into the arena to cheer on their favorite players live.

Ben Mussett, 24, drove two days from his native Ohio in a car packed with friends. He said he found watching video games, which he and other young fans refer to as "eSports," more appealing than traditional spectator sports like basketball and football.

"Traditional sports are kind of boring," Mussett said, "eSports are the future."