On first anniversary of killing, hundreds mourned for Michael Brown 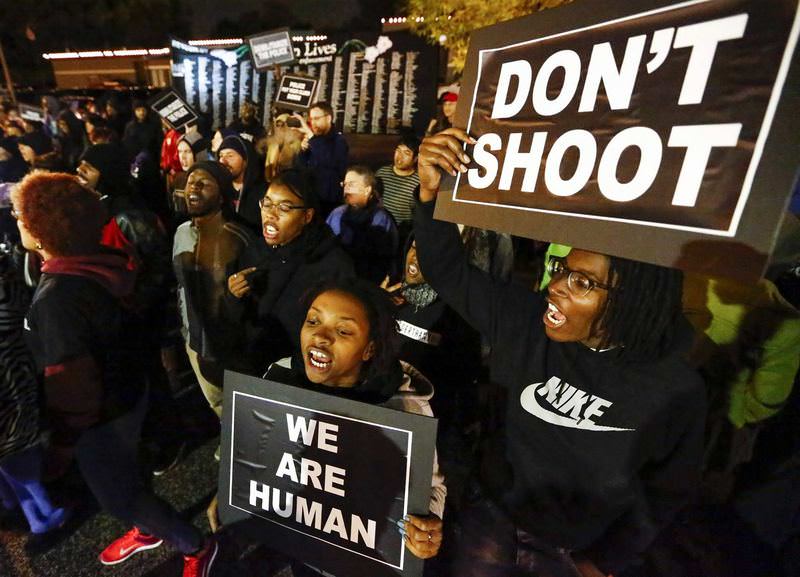 Blacks along with whites organized several demonstrations to condemn racially motivated police attacks.
by Daily Sabah with AP Aug 10, 2015 12:00 am

Thousands of Americans protested police brutality on the anniversary of Michael Brown's death. He became the symbol of racially motivated police attacks in the U.S. after being killed despite being unarmed

On the eve of the anniversary of Michael Brown being shot and killed during a confrontation with a police officer, Brown's father said Saturday that the family still mourns the 18-year-old's death. Several weekend events are planned to commemorate Brown's death. Among them was a parade on Saturday led by Michael Brown Sr., starting at the memorial on Canfield Drive in Ferguson that marks the site where Brown was fatally shot by former officer Darren Wilson on Aug. 9, 2014. Time has not healed his wounds, Brown said before the procession, in which several hundred people, a drum corps and some cars joined in on the five-mile route to Normandy High School. "At the end of the day, I still lost my boy," he said. "I'm still hurting. My family's still hurting."

Although the protests were largely subdued during the day, they picked up after dark as hundreds marched outside Ferguson's police department, mocking the handful of officers who stood watch. Some of the demonstrators carved and ate from the head of a roasted pig, which earlier in the day had the name "Darren Wilson" written on the side of the animal. The pig's head was placed on a concrete barrier near the sidewalk separating the protesters from the officers. Earlier Saturday, Brown Sr. said the anniversary brings back all of the grief and raw emotions, but that it's important to continue standing up to concerns about police brutality and the use of force. His son's death helped spur a national "Black Lives Matter" movement. As the parade began, he took an armful of stuffed animals and placed them in the middle of the street where his son died.

The U.S. Justice Department and a St. Louis County grand jury cleared Wilson, who resigned in November, of wrongdoing. A separate Justice Department investigation of Ferguson's justice system found evidence of a profit-driven court system and widespread racial bias by police. Onlookers were mostly scattered in small clusters during the earlier protest. Ferguson interim Police Chief Andre Anderson stood alongside St. Louis County Police Chief Jon Belmar and Capt. Ron Johnson of the Missouri State Highway Patrol on West Florissant Avenue, waving to participants in the afternoon parade and shaking hands with some. The street was the site of protests, looting and riots in the aftermath of Brown's death.

A vocal group of about 30 people marching in the parade began chanting "Hands up! Don't shoot!" as they neared the officers, then "Pigs in a blanket fry like bacon." Otherwise, the crowd was peaceful. Police presence was limited mostly to officers at intersections keeping traffic away from the parade, and there were no immediate reports of confrontations. Darius Simpson, 22, made the trip to Ferguson from Eastern Michigan University for the weekend and was in the parade. Simpson, who is black, said he had never been an activist until Brown's death, but said a visit to Ferguson last year during the height of the unrest changed him. "Something snapped in me, seeing the memorial, seeing how Ferguson reacted inspired me to take it back to Michigan," Simpson said. St. Louis resident Carlatta Bussey, 41, brought her 7-year-old son. "I wanted to show him he needs to stand up for what he believes in," said Bussey, who is black. "It's important for him to know he has a voice." Hours after the march attended by the elder Brown, hundreds — many with "Black Lives Matter" placards — took part in a similar processional in St. Louis in memory of VonDerrit Myers Jr., a black 18-year-old shot and killed last October by an off-duty St. Louis police officer. The city prosecutor in May announced the officer acted in self-defense after being fired upon by Myers. An attorney for Myers' family says Myers was not armed.

Another march was made on Sunday, again starting on Canfield Drive. That procession stopped just before noon for a moment of silence to mark the moment Brown was killed. Brown's father said a lot of families in the St. Louis area and across the nation are hurting because they've lost loved ones to police violence. Though some groups are pledging civil disobedience in the St. Louis region, Brown urged everyone to mark his son's death in peace. "No drama," he said. "No stupidity, so we can just have some kind of peace."

The shooting and killing of black Americans by police has a long history in the U.S. Americans have long witnessed the deaths of black people and injustice at the hands of police. The U.S., a large multi-racial, multi-ethnic and multicultural country, has long been suffering from discrimination toward black Americans, immigrants, children, the poor and prisoners. African-Americans are the people most likely to be subjected to abuses, as Human Rights Watch (HRW) stated in the World Report 2015. According to a report released by the Centre for Research on Globalization, the number of Americans killed by police was 5,000 in the last decade. Police in the U.S. have killed people at a rate of more than two a day this year, according to data gathered by the Washington Post published on May. At least 385 people nationwide were shot and killed by police, the report says, focusing on "police use of deadly force especially against minorities." The findings emphasize the situation of minorities, reporting that two-thirds of the victims are black or Hispanic: "Overall, blacks were killed at three times the rate of whites or other minorities when adjusting by the population of the census tracts where the shootings occurred." The report also said that more than 80 percent of people killed by the police were armed with lethal weapons. "Almost one in six" were unarmed or were carrying a replica gun.

According to other data collected by the activist group Killed by Police, nearly 1,500 confirmed police-involved deaths have occurred in the country since January 2014. The actual figure is expected to be much higher than as there is no verified U.S. database of police shootings.

Regarding deaths caused by the police, many people have died while in police custody or shot dead in the process of arrest as in the case of Michael Brown who was shot dead on Aug. 9, 2014. Amid a spate of high-profile police killings, police brutality targeting black men is receiving much wider publicity in the country, including the case of Eric Garner, Tamir Rice in Ohio and Michael Brown in Ferguson, Missouri in just one year. The latest case of 25-year-old Freddie Gray in Baltimore, Maryland caused many people to take to the streets of, leading to confrontations between protesters and police. Gray died on April 19 after suffering a fatal spinal injury while in custody. Racially charged protests across the country have shaken the U.S. as more people demand justice and an end to discrimination of black Americans.

American cities with predominantly black populations appear to be bearing the brunt of excessive force by police as key incidents of police shootings prevail in these areas.
Last Update: Aug 10, 2015 10:00 am
RELATED TOPICS