Two shot in Ferguson amid standoff between police, protesters 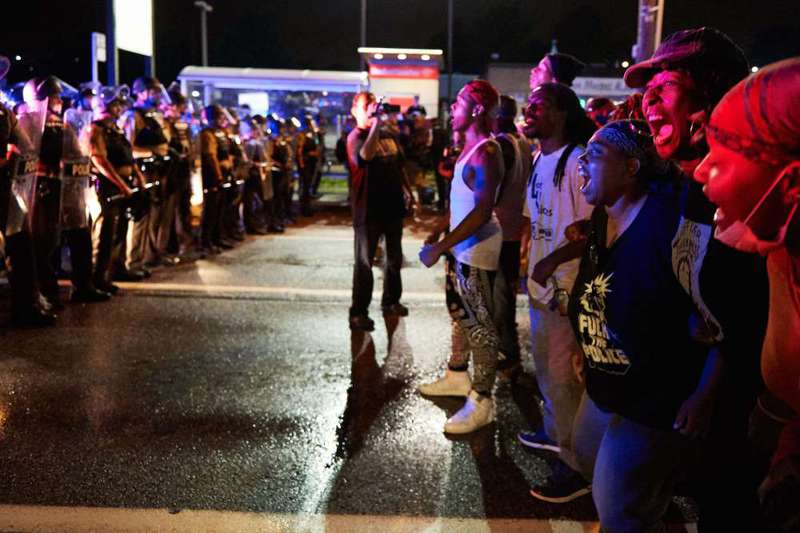 by Daily Sabah with Wires Aug 11, 2015 12:00 am
Two people were struck by gunfire during a standoff between riot police and protesters on Sunday night in Ferguson, Missouri, after a day of otherwise peaceful rallies commemorating the fatal shooting of an unarmed black teenager by a white officer one year ago. Several volleys of gunshots rang out as police tried to disperse demonstrators blocking traffic and smashing storefront windows along a street that was a flashpoint of last year's unrest in the St. Louis suburb following the slaying of 18-year-old Michael Brown.

The origin of the gunfire and condition of the two people shot was not immediately known, police said. One of the victims, a black male who looked to be a teenager or young adult, appeared in a Reuters photo to have been badly wounded.

Anniversary commemorations for Brown had begun hours earlier with a peaceful march through the St. Louis suburb after a moment of silence for the teenager, whose death on Aug. 9, 2014, ignited months of demonstrations and a national debate on race and justice.

The scene changed dramatically after dark with dozens of protesters blocking traffic and smashing store windows along West Florissant Avenue, which bore the brunt of last summer's rioting, chanting "Shut it down" in the midst of a severe thunderstorm. A phalanx of helmeted police wearing body armor and carrying shields moved in. Protesters briefly fell away before regrouping to confront the line of officers, who ordered them to disperse.

The face-off was shattered by bursts of gunfire, sending police crouching behind their patrol cars and demonstrators scurrying for cover. Helicopters whirred overhead as additional police armed with assault rifles swarmed the area, some roaring down the street in armored vehicles in the direction of the gunfire. A body could be seen on West Florissant Avenue and a young woman screamed that her brother had been shot. Multiple store windows were smashed and police stood atop vehicles surveying the scene. Merchants, some armed, stood guard outside their businesses yesterday after the incident. "The St. Louis County Police Department was involved in an officer-involved shooting after officers came under heavy gunfire," county police spokesman Shawn McGuire said in a statement. He said at least two unmarked police cars had been hit by gunshots.

Brown's death - and a grand jury decision to spare officer Darren Wilson from criminal charges for shooting him - reignited a national debate over race in America and sparked protests across the country. In an effort to draw attention to police brutality toward the black community, hundreds of thousands took to the streets in protest. It also sparked greater scrutiny of racial bias within the U.S. criminal justice system, giving rise to the "Black Lives Matter" movement that gained momentum from a series of other high-profile slayings of unarmed minorities by white police in cities such as New York, Baltimore, Los Angeles and Cincinnati. Many have called for the reform of police practices, especially toward black American citizens, a new police chief in Ferguson and a national law to prevent racial profiling by police during protests.

Another name was added to that list on Friday when unarmed 19-year-old Christian Taylor, a black college student, was shot dead by a white police officer investigating a burglary at a car dealership in Arlington, Texas. Christian Taylor, a sophomore American football player at Angelo State University, allegedly drove his car through the showroom glass doors of a car dealership in the Dallas suburb of Arlington, according to The Dallas Morning News. After police responded to a reported burglary at the dealership and found Taylor inside, he was fatally shot by 49-year-old rookie police officer Brad Miller during an altercation, the daily said. Taylor died at the scene, according to the Tarrant County medical examiner's office.
RELATED TOPICS