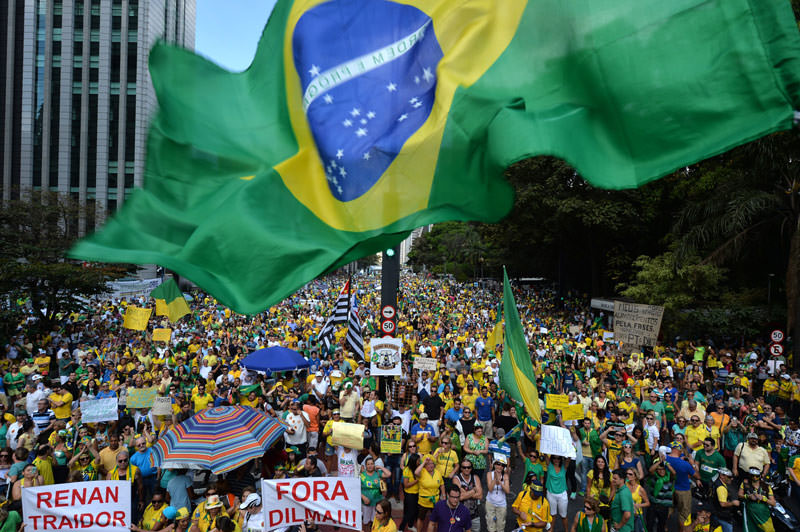 by Anadolu Agency
Aug 17, 2015 12:00 am
Hundreds of thousands of people took to the streets across Brazil on Sunday in protests at President Dilma Rousseff and her government.

Demanding an end to corruption in Rousseff's multi-party government, many demonstrators called for Rousseff to be impeached.

Local media reported protests in more than 150 major cities across the country - the third such nationwide outpouring of dissent this year.

Brazilian polling institute Datafolha said 135,000 people filled Sao Paulo's central avenue, Avenida Paulista - more than in a similar protest in March but fewer than at one held in April.

The city's police estimated 350,000 - also up on the April estimate but below the 1 million people they said had flooded Avenida Paulista in March.

Many demonstrators said they were angry at the country's troubled economy, which is set to contract by around two percent this year on a backdrop of austerity measures, rising inflation and creeping unemployment.

Many have accused Rousseff of knowing about system of bribes that stretches back to when she was chairwomen of the company between 2003 and 2010.

Although Rousseff has been cleared of any involvement by investigators, key members of her government are under investigation and some in her left-wing Workers' Party have been charged.

"I'm here today to protest against the government - a gang of criminals who have destroyed our country," Sao Paulo lawyer Ani Caprara, 49, told Anadolu Agency. "We need better people to take charge so that Brazil can return to a proper democracy. Brazil deserves that."

Despite calls for impeachment, many protesters said they were simply demanding a better future for Brazil.

Marcius Kelen, 56, an administrator from Sao Paulo, said he wanted a better future for his family: "Brazil is going through something I've never seen before and we need to fight against this corrupt, shameless government. I don't care if we go through an impeachment or not but I want them to make our country great again."

A small number also called for a "constitutional military intervention" to remove the government.

"Things are only going to get worse in Brazil, so we need this radical solution," Eliane Custodio Maffei, a 49-year-old lawyer from Sao Paulo, said. "I used to believe impeachment would be enough, but now I think we need a military intervention."

The majority of the protesters were white, middle-class families and, despite serious demands, many of the demonstrations had a carnival-like atmosphere.

"It's time for an end to the lying, the corruption and the indifference toward Brazilians," Neves told local media in Belo Horizonte.

Despite the protests and many months of political and economic turmoil, as well as an approval rating of seven percent, Rousseff has in the past days managed to improve relations with lawmakers.

Many institutions that had been previously calling for impeachment proceedings have softened their demands and conceded the president's removal could undermine the country further.
Last Update: Aug 17, 2015 6:25 pm