Trump: Deny citizenship to babies of illegal migrants in US 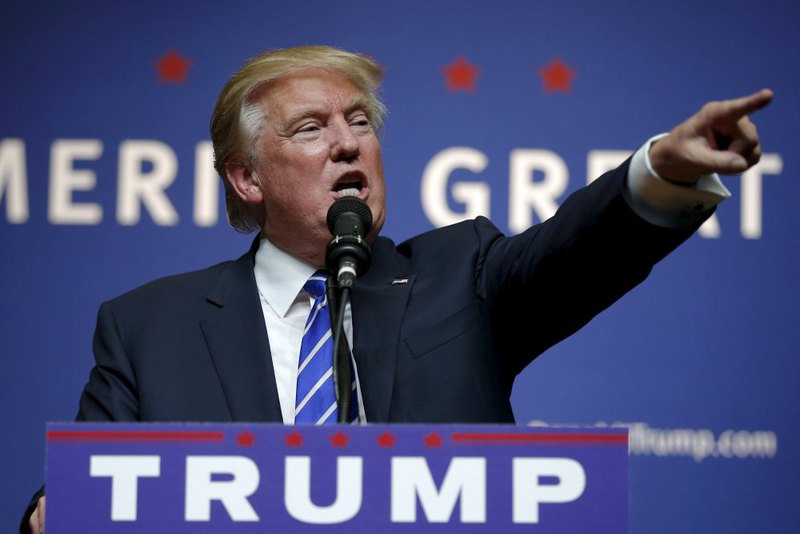 by Daily Sabah with AP Aug 18, 2015 12:00 am
Republican presidential candidate Donald Trump wants to deny citizenship to the babies of immigrants living in the U.S. illegally if he is elected to the White House, he said in an interview with NBC News that will air on Sunday. He would also rescind Obama administration executive orders on immigration.

Trump, the brash billionaire who has taken an early lead in the Republican primary race, described his expanded vision of how to secure American borders during a wide-ranging interview Sunday on NBC's "Meet The Press," saying that he would push to end the constitutionally protected citizenship rights of children of any family living illegally inside the U.S. "They have to go," Trump said, adding: "What they're doing, they're having a baby. And then all of a sudden, nobody knows ... the baby's here." Native-born children of immigrants even those living illegally in the U.S. have been automatically considered American citizens since the adoption of the 14th Amendment of the U.S. Constitution in 1868.

The odds of repealing the amendment's citizenship clause would be steep, requiring the votes of two-thirds of both houses of Congress and support from three-fourths of the nation's state legislatures. Republicans in Congress have pushed without success to repeal that provision since 2011. Some conservatives believe the provision could be changed without amending the Constitution. "They're illegal," Trump said, describing native-born children of people living illegally in the US. "You either have a country or not." Trump, who remains a longshot for the White House, has made immigration the focal point of his campaign since announcing his candidacy in June, when he described some Mexican immigrants in the U.S. illegally as "rapists" and "criminals." His tough stance on immigration has appealed to a segment of the Republican base and helped the former reality TV star vault ahead of the crowded Republican presidential field.

Trump's immigration rhetoric has unnerved Republican leaders who want to woo the rapidly growing bloc of Hispanic voters, who have voted overwhelmingly Democratic in recent presidential elections. Trump's remarks came as his campaign website posted his program for "immigration reform." Among its details: Making Mexico pay for a permanent border wall. Mandatory deportation of all "criminal aliens." Tripling the force of immigration officers by eliminating tax credit payments to immigrant families residing illegally in the U.S.

He said that families with U.S.-born children could return quickly if deemed worthy by the government. "We're going to try and bring them back rapidly, the good ones," he said, adding: "We will expedite it so people can come back in. The good people can come back." Trump did not elaborate on how he would define "good people." But echoing earlier controversial remarks that Mexico was sending criminals across the border, Trump said a tough deportation policy was needed because "there's definitely evidence" of crimes linked to immigrants living in the country illegally.

The New York real estate mogul also said he would waste little time rescinding President Barack Obama's executive actions aimed at allowing as many as 3.7 million immigrants living illegally in the U.S. to remain in the country because of their U.S.-born relatives. Obama's November 2014 actions were halted by temporary injunctions ordered by several federal courts in rulings challenging his executive powers to alter immigration policies without Congressional approval. The cases could wind up before the U.S. Supreme Court. "We have to make a whole new set of standards," Trump said. "And when people come in, they have to come in legally." Most other Republican candidates also back completing the border wall but differ over how to treat immigrant families already living in the U.S. illegally.

Donald Trump, the flamboyant real estate magnate and television personality whose fortune is valued at $9 billion, announced that he is running for the U.S. presidency on the ticket of the Republican Party in June.
RELATED TOPICS