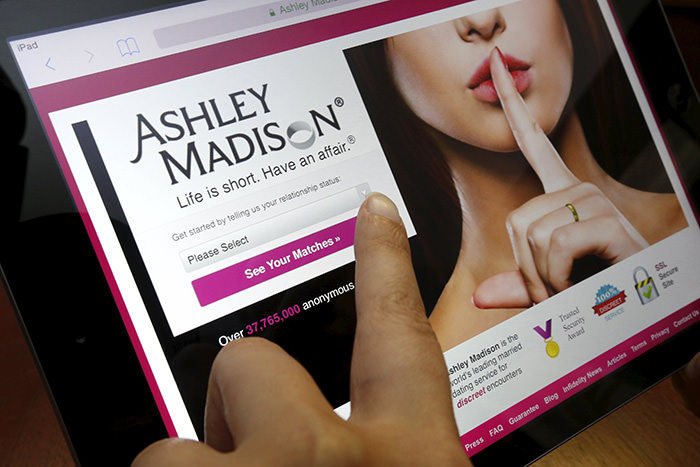 The homepage of the Ashley Madison website is displayed on an iPad, in this photo illustration taken in Ottawa, Canada July 21, 2015 (Reuters Photo)
by Aug 19, 2015 12:00 am
Avid Life Media, the company behind infidelity website AshleyMadison.com, confirmed on Wednesday that some legitimate data has been stolen from it and published online, but said it has never stored credit card information on its servers.

Hackers dumped a massive cache of data about Ashley Madison users online late on Tuesday, posting it on a part of the Internet that is only accessible by using a specialized browser.

Lists of email addresses quickly popped up in more accessible parts of the Web, threatening to wreak havoc on relationships across the globe.

The release of the information came a month after a breach of Ashley Madison security was first reported, and after Toronto-based Avid Life ignored hackers' demands to shut down both the Ashley Madison site and another site called Established Men, which pairs older men with young women.

"There has been a substantial amount of postings since the initial posting, the vast majority of which have contained data unrelated to AshleyMadison.com but there has also been some data released that is legitimate," Avid Life spokesman Paul Keable said in an email.

"Furthermore, we can confirm that we do not - nor ever have - store credit card information on our servers," he said.

Several security experts have said that people they know, who are Ashley Madison members, have found their names in the leaked data, with partial credit card details attached.