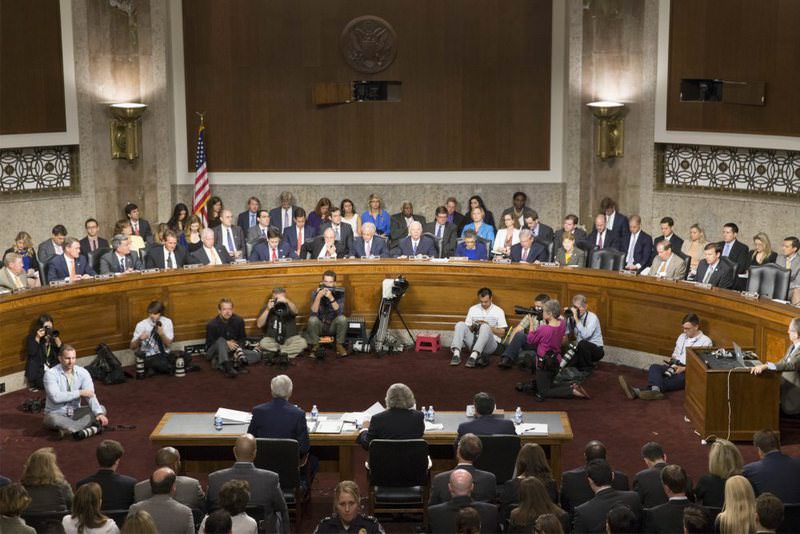 by Daily Sabah with Agencies Aug 27, 2015 12:00 am
Despite years of intensive negotiations, lawmakers could "kill" the agreement that world powers and Iran brokered in July, the White House said Wednesday as it seeks additional support from lawmakers.

"Congress does have the capacity to kill this agreement," spokesman Josh Earnest told reporters, saying lawmakers could effectively undermine the agreement by refusing to allow President Barack Obama to lift sanctions. "They'll refuse to allow the United States to implement an international agreement that basically the rest of the world has signed off on," Earnest said. Iran agreed to allow unprecedented inspections and curbs on its nuclear program in exchange for relief from economic sanctions that have stymied the Islamic Republic's economy. Congress will return to Washington early next month before a Sept. 17 deadline to vote on the pact. Earnest said that there are currently "26 or 27" senators who have voiced support for the agreement, and only two Democrats who have registered their opposition to the accord.

Democratic support is critical in the Senate where the Obama administration is seeking to ensure that lawmakers cannot override a presidential veto. They would need a two-thirds majority to do so, which would require support from 10 pivotal Democrats. Republicans currently hold 54 seats in the 100 member Senate. On Tuesday, Sen. Patty Murray, the fourth-ranking Senate Democrat, became the newest senator to officially back the agreement. Sen. Harry Reid, the senate minority leader, on Sunday lent his support to the agreement. "There are several indications that we are succeeding in our efforts to build sufficient support for the agreement in Congress, but we certainly want to collect as many votes as possible," he said.

On the other hand, a key U.S. Republican committee chairman acknowledged Tuesday that the White House lobbying campaign for the Iran nuclear deal has generated results, and said he doesn't know if opponents of the deal can prevail. The comments from Sen. Bob Corker, who chairs the Foreign Relations Committee and is a leading voice against the deal, came as supporters of the agreement claimed growing momentum. A 29th senator, Democrat Patty Murray of Washington, came out in favor of the deal on Tuesday. Corker said he didn't know if opponents could stop that effort. But he criticized the Democrats' attempts to delay the disapproval resolution and block a final vote, given that Congress overwhelmingly endorsed hard-fought legislation giving lawmakers the right to weigh in on the deal. "I find that stunning that the leader, the Democratic leader, is proposing that," Corker told The Associated Press in a phone interview. "All but one senator voted in favor of having the right to vote on the final deal, so then to turn right around and filibuster it to me is very inconsistent and I think would be confusing to the people they represent."

As for whether Republicans who control Congress and unanimously oppose the deal could thwart such tactics, Corker said: "I don't know, I don't know. I don't think there's any question but the lobbying effort by the administration certainly has generated results, and I have no idea what the final vote is going to be but certainly they've picked up some support on the Democratic side," Corker said. He declined to speculate as to why lobbying by opponents, including the powerful American Israel Public Affairs Committee, has not gotten more traction. Israel says the deal poses a threat to its very existence. In her statement backing the agreement, Murray said: "This is not a perfect deal, and there are several elements I would like to be stronger. But after working my way through the details and the alternatives, losing a lot of sleep, and having a lot of good conversations with so many people, I am convinced that moving forward with this deal is the best chance we have at a strong diplomatic solution."

Only two Senate Democrats Chuck Schumer and Bob Menendez have announced that they will vote against the agreement, though several key Democratic senators have yet to announce their position. One of the most-watched is Sen. Ben Cardin, who is the top Democrat on the Foreign Relations Committee and whose position could influence colleagues. Corker said he spoke with Cardin Tuesday morning but that Cardin remained undecided.

Congressional aides say they've rarely seen the White House work an issue so hard, with Obama making personal appeals to undecided lawmakers. The disapproval resolution is certain to pass the House, though Democratic leader Nancy Pelosi has declared that Democrats have the votes to sustain an Obama veto. Two-thirds of the vote are required in each chamber to override a presidential veto.

On July 14, Iran and world powers reached a deal in the Austrian capital after marathon talks on Tehran's controversial nuclear program that had poisoned international relations for 12 years.

The agreement makes it almost impossible for Iran to build an atomic bomb for several years, in exchange for a gradual lifting from 2016 of international sanctions that have been suffocating the country's economy. While the majority of the world called it a historic deal, Israeli Prime Minister Benjamin Netanyahu blasted that the deal as a "stunning historic mistake" and pointedly noted that his country is not bound by the agreement. The Gulf countries, especially Saudi Arabia, remained silent, but the silence is believed to be a show of displeasure. Considering Iran as the biggest threat in the region, the nuke deal worries Saudi Arabia and other tiny Gulf countries.
Last Update: Aug 27, 2015 8:11 pm
RELATED TOPICS