Pope Francis likely to meet with Castro in Cuba 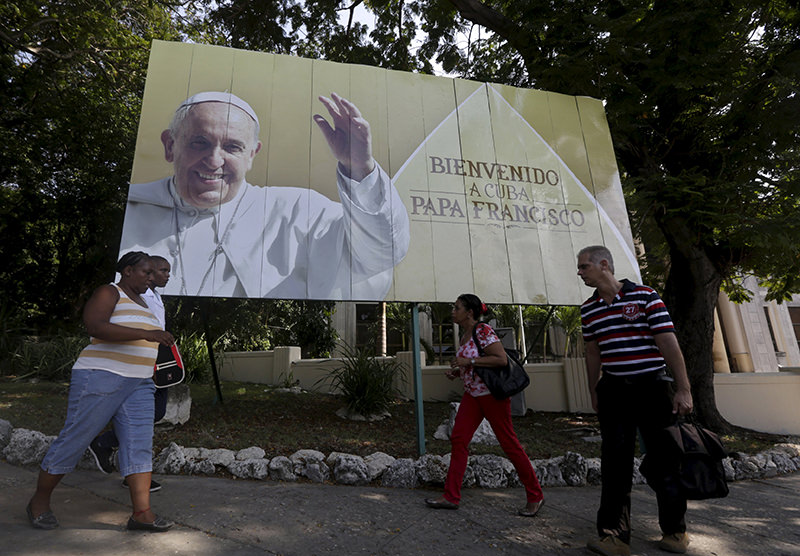 ubans walk under a poster of Pope Francis, which reads ,Welcome to Cuba, in Havana September 14, 2015. Pope Francis will be visiting Cuba from September 19 to September 22. (Reuters Photo)
by Sep 15, 2015 12:00 am
Pope Francis is likely to meet Fidel Castro during his upcoming trip to Cuba, the Vatican said Tuesday.

"A meeting with Fidel Castro is probable, even if it is not yet scheduled for a specific time in the program," spokesman Federico Lombardi told reporters ahead of the pontiff's eight-day trip to Cuba and the United States, which begins Saturday.

Fidel's hope to meet the Argentine "was expressed by his brother, President Raul Castro, to the pope when he came to the Vatican in the spring," he said.

Francis was widely recognized for the key role he played in Cuba's reconciliation with the United States this year.

The countries agreed a historic deal in July to re-establish full diplomatic relations, severed at the peak of the Cold War.

It would not be the first meeting between Fidel and the head of the Roman Catholic Church: both John Paul II and Benedict XVI travelled to Cuba and met the former leader.

Spokesman Lombardi ruled out a possible meeting during the US-leg of the trip with Russian President Vladimir Putin, brushing off media reports that the pair would meet when the pontiff addresses the United Nations in New York.

Lombardi also dismissed concerns over Francis's security, saying the 78-year old pope -- who loves nothing more than to plunge into the crowds -- would move around freely during the trip.