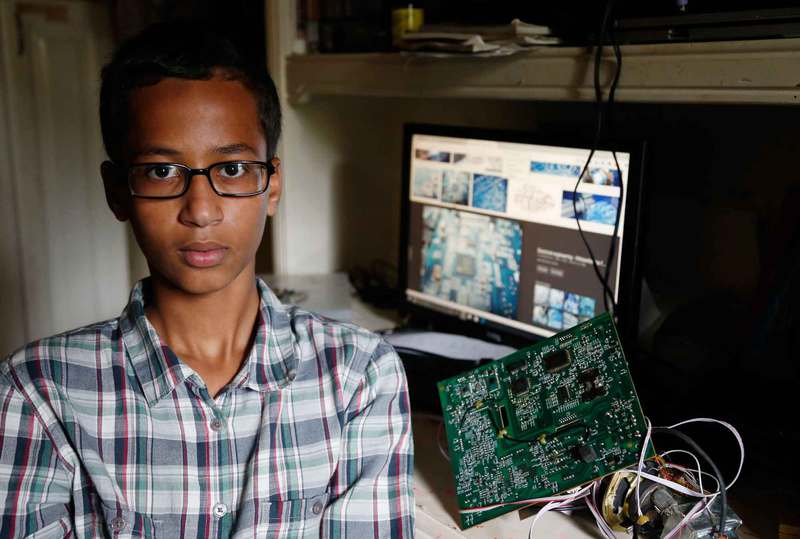 by Daily Sabah with Agencies Sep 16, 2015 12:00 am
A 14-year-old Muslim student, who was detained for bringing a homemade clock to school, has accepted President Obama's invitation to the White House.
In a tweet posted Wednesday, Obama called Ahmed Mohamed's clock "cool" and said more kids should be inspired like him to enjoy science, because "it's what makes America great."


Cool clock, Ahmed. Want to bring it to the White House? We should inspire more kids like you to like science. It's what makes America great.


Ahmed was led out of a Texas school in handcuffs after bringing a homemade digital clock to class his teachers thought was a bomb, prompting accusations of Islamophobia and an online backlash Wednesday.

A photo of Ahmed Mohamed, 14, standing in handcuffs while wearing a t-shirt with the US space agency NASA's logo was retweeted thousands of times in a matter of hours.

Mohamed told The Dallas Morning News that he was just trying to impress his teachers when he brought the clock to MacArthur High school on Monday.


"My hobby is to invent stuff," he said in a video posted on the paper's website that was filmed in his electronics-filled bedroom.

"I made a clock. It was really easy. I wanted to show something small at first... they took it wrong so I was arrested for a hoax bomb."

Mohamed, who had loved robotics club in middle school and was hoping to find something similar in high school, said he didn't get the reaction he was looking for from his engineering teacher.

"He was like, 'That's really nice,'" Mohamed said. "'I would advise you not to show any other teachers.'"

But the alarm went off during his English class, and that teacher confiscated the clock.

The school called police and Mohamed was taken away in handcuffs, with police saying they may charge him with making a hoax bomb.

The aspiring inventor, who lives in Irving just outside Dallas, said police would not let him call his parents during interrogation. Once released, he was suspended from school for three days.


A photo of Ahmed standing in handcuffs while wearing a t-shirt with the US space agency NASA's logo was retweeted thousands of times in a matter of hours and "#IStandWithAhmed" was the top trending hashtag on Twitter.
Among those voicing support for the boy was Hillary Clinton, who tweeted: "Assumptions and fear don't keep us safe - they hold us back. Ahmed, stay curious and keep building."

.@NichelleIsUhura Ahmed was arresting for bringing a homemade clock to school. He was wearing a @NASA shirt! pic.twitter.com/7QqMo6RFnu

The Council on American-Islamic Relations said the heavy-handed response is particularly suspicious given the current political climate in Irving.

Mayor Beth Van Duyne has claimed that Muslims are plotting to impose Sharia law in America.

"This all raises a red flag for us: how Irving's government entities are operating in the current climate," Alia Salem, who directs the council's North Texas chapter, told the Morning News.

"We're still investigating," she said, "but it seems pretty egregious."

Wired magazine was among those who responded to the incident with a mixture of humor and horror, posting an article entitled "How to Make Your Own Homemade Clock That Isn't a Bomb" and encouraging kids to bring them to school.

"Thank you fellow supporters. We can ban together to stop this racial inequality and prevent this from happening again," read a tweet that included a photo of the smiling boy in his NASA t-shirt holding two fingers up in the sign of victory.

In a letter to parents, MacArthur High School principal Dan Cummings said police had responded to a "suspicious-looking item" on campus, without discussing the specifics of the case.
Last Update: Sep 17, 2015 11:23 am
RELATED TOPICS