At least 5 dead in Chile earthquake 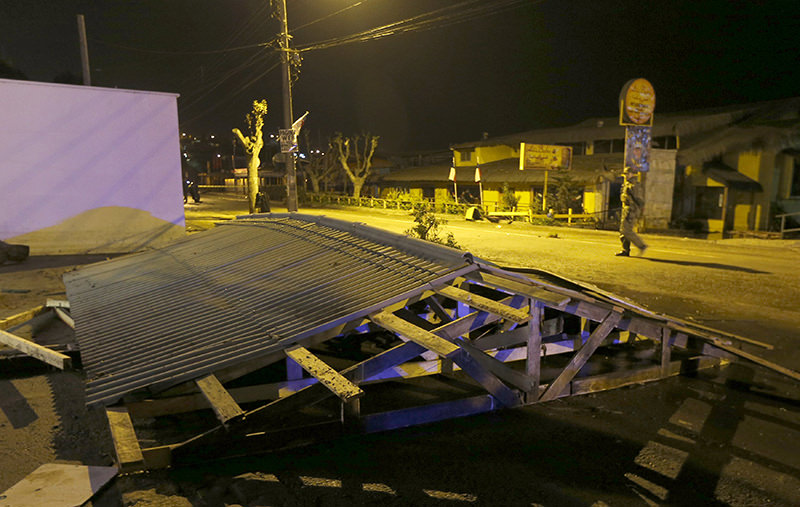 he roof of a shop is pictured on the ground after it was dislodged by waves in Concon city September 16, 2015. A magnitude 8.3 earthquake hit off the coast of Chile (Reuters Photo)
by Compiled from Wire Services Sep 17, 2015 12:00 am
Chilean local authorities report five dead in the earthquake that shook the country, as waves caused by the tremor hit the coast.

Police in the town of Limari say two people died, newspaper El Mercurio reports. One man died of a heart attack in the town of Maipu, the mayor is quoted by Chilean daily La Tercera as saying. The mayor of Illapel, the town closest to the epicentre, says a woman had died there, according to La Tercera.

Tsunami waves of more than 3 metres are possible in Chile, according to Pacific Tsunami Warning Centre.

Waves about that height are reported in Coquimbo, with smaller tsunami waves in Valparaiso, Concon and other Chilean cities.

Tsunami waves of up to three metres (10 feet) are possible along the coast of French Polynesia after an 8.3 magnitude earthquake struck off the coast of Chile, the Pacific Tsunami Center (PTWC) in Hawaii said on Thursday.

The PTWC also issued an alert for tsunami waves of between 0.3 to 1 metres (1-3 feet) for Japan, Antarctica, and most of the South Pacific, including New Zealand, Fiji, Tonga, Vanuatu and the Solomon Islands.