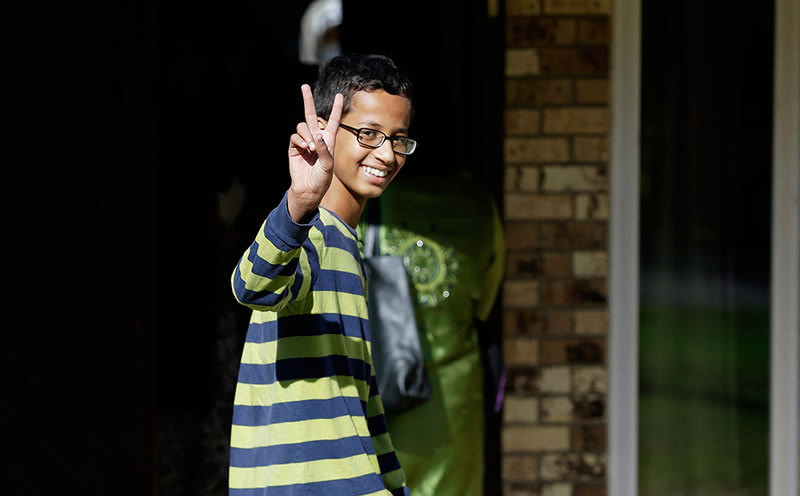 by daily sabah Sep 24, 2015 12:00 am
Ahmed Mohamed, the Muslim student who was detained for bringing a homemade clock to school which supposedly resembled a 'bomb', is to meet with Turkish Prime Minister Ahmet Davutoğlu on Friday in New York.

Mohamed el-Hasan Mohamed, Ahmed's father, stated that they have received an invitation from the Türken foundation for an evening reception in New York on Friday, which PM Ahmet Davutoğlu will also be attending.

Thanking Turkey for supporting Ahmed in such hard times, Mr. Mohamed said that he and Ahmed will gladly join the formal dinner.

Talking to Turkish Anadolu Agency with his wife Muna İbrahim, El-Hasan Mohamed said "What had happened to our son has affected everyone all over the world, especially the Turks…Turkey has supported us right from the beginning. We're praying for them [Turkey],".

Stating that Muslims sharing their sorrows is a part of Islam, El-Hasan Mohamed relayed his gratitude for the Turkish nation, particularly President Recep Tayyip Erdoğan, Ahmet Davutoğlu and the Türken Foundation.


Expressing that he found the support of Turkish media and authorities very sincere, he added that such concrete steps like the invitation to support Ahmed gave the family reassurance.

El-Hassani Mohamed said police treated his son as an adult criminal, rather than a school child, when they placed his arms behind his back, handcuffed and held him.

"He was humiliated, and mistreated," El-Hassani Mohamed said, "It was disgusting. It was not right," he added.

News of the arrest sparked a rush of support for Ahmed, including from President Obama, Facebook founder Mark Zuckerberg, NASA, Google and the Massachusetts Institute of Technology (MIT).

Immediately after hearing the custody case, President Obama had invited the 14-year-old Ahmed to the White House. Obama had sent his invitiation via tweet and had called Ahmed Mohamed's clock "cool" and said that more kids should be inspired like him to enjoy science, because "it's what makes America great."

A photo of Mohamed standing in handcuffs while wearing a t-shirt with the US space agency NASA's logo was retweeted thousands of times in a matter of hours and "#IStandWithAhmed" became the top trending hashtag on Twitter.

Ahmed was handcuffed and led out of MacArthur High School in Irving, Texas, by police Monday when a teacher, whom he took the clock to show, mistook it for a bomb.

Despite insisting the device was nothing but a clock, police rejected Ahmed's explanation and demanded "a broader explanation" of the device's function before ordering him sent to a juvenile detention center, charged with building a hoax bomb. He was cleared of all charges days later.