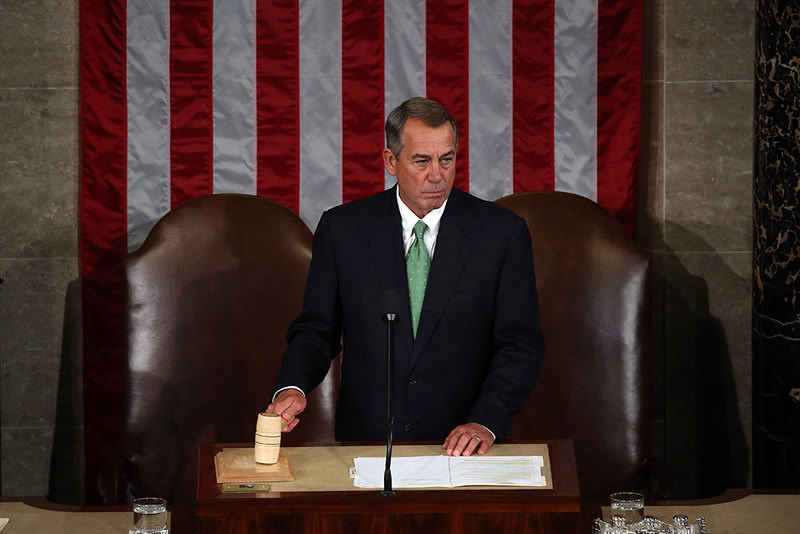 by German Press Agency - DPA Sep 25, 2015 12:00 am
Speaker of the House of Representatives John Boehner said Friday he will step down to avoid a looming leadership fight with conservative members of his caucus that could damage his Republican Party and the US Congress.

"The first job of any speaker is to protect this institution that we all love," he said in a statement.

"It is my view, however, that prolonged leadership turmoil would do irreparable damage to the institution. To that end, I will resign the speakership and my seat in Congress on October 30."

Boehner has held the highest office in the legislative branch of government for nearly five years, often clashing with Democratic President Barack Obama over policies including government spending and the president's signature health insurance reforms.

Within his own party, Boehner had long faced an insurgency among members of the anti-government Tea Party movement, who had long deemed him too willing to compromise with Democrats.

On Capitol Hill, Democrats expressed dismay at the leadership change.

"By ousting a good man like Speaker Boehner - someone who understood the art of compromise - the party of Eisenhower and Reagan is no more," Senate minority leader Harry Reid, the top Democrat in the upper chamber, wrote on Twitter.

Boehner, who first told lawmakers at a Friday morning meeting of his decision, had been facing a tough battle with a Wednesday deadline to pass a budget agreement or allow a goverment shutdown.

He had sought to avoid a repeat of the 2013 federal shutdown, which was seen as badly damaging the Republican Party's brand, but conservatives in the party were demanding lawmakers tie the government funding bill to an effort to defund women's health provide Planned Parenthood over concerns about the treatment of aborted fetuses.

Vocal critics within his own party had been preparing to challenge Boehner's leadership of the House and welcomed his decision.

Congressman Tim Huelskamp, who has been among Boehner's conservative critics, declared: "Today the establishment lost." Outside Washington, the leader of the grass-roots Tea Party Patriots group thanked its members for pressuring lawmakers to oust the speaker.

Boehner presided Thursday over a joint session of Congress for an address by Pope Francis. The devout Roman Catholic lawmaker had sought for years to bring a pontiff to Congress and told reporters that he had nothing left to accomplish after he brought Francis to the Capitol.

Boehner, who led opposition Republicans in the lower chamber since 2007, became speaker after the conservative party won a majority in the 2010 congressional elections.

A member of Congress from the Midwestern state of Ohio since 1991, he was seen as an establishment Republican, and often faced opposition from more doctrinaire members of his own parliamentary faction.

Relations between Obama and Boehner have been highly partisan but personally generally cordial.